At White House Rally, Lawmakers Ask Obama to Save Christian Mom in Sudan 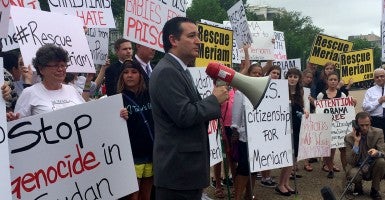 'It is horrific, and it should unify everyone,' Sen. Ted Cruz says of the case of the mother sentenced to death in Sudan for her Christian faith. (Photo: Melissa Quinn)

A crowd of more than 100 representing the Institute on Religions and Democracy and the groups International Christian Concern and Open Doors joined the two lawmakers in front of the White House, Brandishing signs pleading for Ishag’s release.

Ishag, a native of Sudan, remains imprisoned in the African country on charges of adultery and apostasy for refusing to convert to Islam. A Sudanese court sentenced her to 100 lashes and death by hanging two years after giving birth. Ishag’s 20-month-old son, Martin, and newborn daughter, Maya, also are being held.

“That is grotesque. It is immoral. It is horrific, and it should unify everyone,” Cruz said.

Ishag’s husband, Daniel Wani, also was born in Sudan and became a naturalized U.S. citizen in 2005. He resides in New Hampshire while his wife, a physician, awaits a visa to emigrate to the United States.

We just hope that somehow this president will find the courage and the commitment to religious freedom that underpins everything that America is or was ever meant to be, to stand up for this lady who personifies the tragedy of religious freedom persecution in the world.

“You know, Washington, D.C., is a city where there’s a lot of partisan politics,” Cruz said. “Meriam Ibrahim is not an issue on which there should be any partisan divide.”

In a June 5 press briefing, State Department spokeswoman Marie Harf said the agency had been in contact with both the Sudanese government and Wani’s lawyers. The department did not reply to The Daily Signal’srequest for comment.

Although members of Congress have pleaded with Obama to intervene, the White House has been silent.

A petition on the White House’s “We the People” page was created May 28, asking Obama to pressure the Sudanese government to release Ishag and her children. To date, the petition has garnered support from more than 42,000, but needs to reach 100,000 before the White House responds.

There is no voice in the world that can have the impact that the president of the United States can have. And President Obama should stand up and tell the government of Sudan, ‘You will not execute this young mother. Free Meriam Ibrahim. Free her babies, Martin and Maya, now. Send them home to America.’