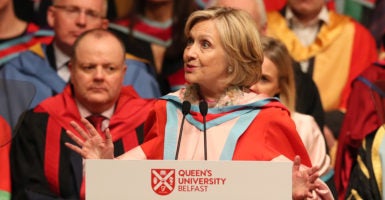 State Department officials opposed to disclosing more of Hillary Clinton’s emails as secretary of state made “false statements” and filed “false affidavits” in a related lawsuit, a federal judge said during a court hearing in Washington earlier this month.

If Lamberth agrees with Judicial Watch, Clinton and others would have to testify under oath and answer questions about how the department processed the organization’s Freedom of Information Act requests, and how it conducted its search for emails Clinton sent and received over a private email server.

Mills was Clinton’s chief of staff and counselor when she was secretary of state from Jan. 21, 2009, to Jan. 31, 2013, and worked on her presidential campaigns.

The State Department had asked Lamberth to issue a summary judgment that would have closed the case and ended any more inquiries into Clinton emails that have not been disclosed.

The judge refused and explained during the Oct. 12 hearing why he had granted limited discovery of relevant facts in March 2016:

The case started with a motion for summary judgment here and which I denied and allowed limited discovery, because it was clear to me that at the time that I ruled initially that false statements were made to me by career State Department officials. And it became more clear through discovery that the information that I was provided was clearly false regarding the adequacy of the search and this–what we now know turned out to be the secretary’s email system.

I don’t know the details of what kind of IG [inspector general] inquiry there was into why these career officials at the State Department would have filed false affidavits with me. I don’t know the details of why the Justice Department lawyers did not know false affidavits were being filed with me. But I was very relieved that I did not accept them, and that I allowed limited discovery into what had happened.

The full transcript of the hearing is available here.

Judicial Watch, a Washington-based nonprofit that describes itself as promoting “integrity, transparency, and accountability in government,” filed its FOIA lawsuit in July 2014 after the State Department declined to respond to a May 2014 request in which Judicial Watch asked for:

Copies of any updates and/or talking points given to [U.N.] Ambassador [Susan] Rice by the White House or any federal agency concerning, regarding, or related to the September 11, 2012 attack on the U.S. consulate in Benghazi, Libya.

Any and all records or communications concerning, regarding, or relating to talking points or updates on the Benghazi attack given to Ambassador Rice by the White House or any federal agency.

Ambassador to Libya Christopher Stevens and three other Americans died in the terrorist attacks on the consulate and a nearby CIA annex in Benghazi.

This same Judicial Watch lawsuit seeking information about the Benghazi attacks led to the discovery in 2015 of the private email server Clinton used while conducting official business as secretary of state.

The FBI uncovered 72,000 documents as part of its 2016 investigation into Clinton’s use of the private email server, which became an issue in the Democratic nominee’s presidential race with Republican nominee Donald Trump.

Judicial Watch obtained documents containing Clinton emails in response to a FOIA lawsuit it filed May 6, 2015, after the State Department did not respond to an earlier request.

A State Department spokesperson told The Daily Signal that “all remaining” nonexempt records were posted to the department’s website Oct. 1 and 4 in compliance with court orders.

But Judicial Watch continues to press for additional disclosure of Clinton emails, and State Department officials continue to resist that.

“President Trump should ask why his State Department is still refusing to answer basic questions about the Clinton email scandal,” Judicial Watch President Tom Fitton said in an Oct. 17 press release. “Hillary Clinton’s and the State Department’s email coverup abused the FOIA, the courts, and the American people’s right to know.”

During an earlier hearing Oct. 11 in U.S. District Court, the watchdog group reported on the estimated number of Clinton documents the State Department continues to withhold.

Lamberth: The State Department told me that it had produced all the records when it moved for summary judgment and you filed that motion. That was not true when that motion was filed.

Prince: At that time, we had produced all—

Lamberth: It was not true.

Prince: Yes, it was—well, Your Honor, it might be that our search could be found to be inadequate, but that declaration was absolutely true.

Lamberth: It was not true. It was a lie.

Prince: It was not a lie, Your Honor.

Prince: There’s strong precedent saying that items not in State’s possession do not need to be searched.

Lamberth: And that’s because the secretary [of state] was doing this on a private server? So it wasn’t in State’s possession?

Lamberth: So you’re playing the same word game she played?

Prince: Absolutely not, Your Honor. I am not playing that.

In the hearing, Lamberth also said he was “dumbfounded” to learn in a report from the Department of Justice’s inspector general that Mills, Clinton’s former chief of staff, was granted immunity and permitted to accompany Clinton to an FBI interview about her using the private email server to conduct official business.

“I had myself found that Cheryl Mills had committed perjury and lied under oath in a published opinion I had issued in a Judicial Watch case where I found her unworthy of belief,” Lamberth said. “And I was quite shocked to find out she had been given immunity in—by the Justice Department in the Hillary Clinton email case.”

“So I did not know that until I read the IG report and learned that, and that she had accompanied the secretary to her interview,” the judge said.

The Daily Signal requested comment from the State Department and Justice Department about the Oct. 12 hearing and Lamberth’s accusations.

In an email message, a State Department spokesperson told The Daily signal on background that the agency can’t comment on ongoing litigation. The Justice Department also declined to comment.

In a related development, Judicial Watch obtained additional documents in response to a September 2018 Freedom of Information Act lawsuit.

The group said these documents show that “a significant number” of the 340,000 emails found on the laptop of former Rep. Anthony Weiner, D-N.Y., were between Clinton and her longtime aide, Huma Abedin. Weiner is Abedin’s estranged husband.