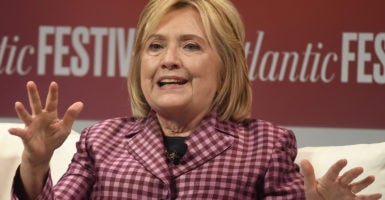 Hillary Clinton, here speaking Oct. 2 at The Atlantic Festival in Washington, D.C., is the subject of Judicial Watch's ongoing court fight with the State Department over her emails. (Photo: Mike Theiler/UPI/Newscom)

In federal court hearings this week, a watchdog legal group keeps the heat on the State Department for answers about the exposure of classified information during Hillary Clinton’s use of unsecure email to conduct official business when she was secretary of state.

A hearing is set Friday in U.S. District Court in the nation’s capital to address a request from Judicial Watch for Clinton, longtime top aide Cheryl Mills, and other current or former State Department officials to testify under oath.

Judicial Watch wants them to address how the department responded to its Freedom of Information Act lawsuit seeking information about the 2012 terrorist attacks in Benghazi, Libya.

“It is frankly unbelievable that the State Department is still protecting Hillary Clinton and her aides from being asked basic questions about her illicit email system,” Judicial Watch President Tom Fitton said in a prepared statement.

“The courts were misled and obstructed by Hillary Clinton’s email scheme, and we hope to get some more answers about this scandal,” Fitton said.

The court hearing Friday follows on the heels of a separate one Thursday where the watchdog group reported on the estimated number of Clinton documents the State Department continues to withhold.

The Washington-based nonprofit’s initial request under the Freedom of Information Act, filed May 13, 2014, sought copies of “any updates and/or talking points” given to Obama administration national security adviser Susan Rice “by the White House or any federal agency concerning, regarding, or related to the September 11, 2012 attack on the U.S. consulate in Benghazi, Libya.”

The watchdog also sought all “records or communications concerning, regarding, or relating to talking points or updates on the Benghazi attack” given to Rice by the White House or any federal agency.

Ambassador Christopher Stevens and three other Americans died in the terrorist attacks on the consulate and a nearby CIA annex in Benghazi.

“These new classified and other emails appear to be among those that Clinton had attempted to delete or had otherwise failed to disclose,” Judicial Watch said Wednesday in a press release.

The watchdog group obtained documents containing the Clinton emails in response to the Freedom of Information Act lawsuit it filed May 6, 2015, after the State Department failed to respond to an earlier request.

Judicial Watch had sought all emails “sent or received by” Clinton while she was secretary of state from January 2009 until January 2013, plus “all emails by other State Department employees” to Clinton using her private, nongovernment email account.

U.S. District Judge James E. Boasberg ordered the State Department to complete processing, by Sept. 28, the remaining 72,000 pages of documents the FBI had uncovered as part of its 2016 investigation into Clinton’s use of the private email server.

The tens of thousands of Clinton emails include messages sent to her by longtime aide Huma Abedin.

The FBI found emails from Abedin on a laptop computer belonging to her estranged husband, former Rep. Anthony Weiner, D-N.Y., prompting then-FBI Director James Comey to briefly reopen the FBI’s email probe only days before the presidential election on Nov. 8, 2016.

The Daily Signal asked the State Department whether it had complied with the court’s Sept. 28 deadline.

A State Department spokesperson, in a response on background only, said the agency had “completed its review of documents” supplied by the FBI as part of its investigation.

The Daily Signal also asked whether the State Department had provided Judicial Watch with copies of previously unreleased Clinton emails.

The spokesperson replied that “all remaining” nonexempt records were posted to the State Department’s website Oct. 1 and 4 in compliance with court orders.

Clinton previously said 55,000 pages of documents she submitted to the State Department in December 2014 included all of her work-related emails.

In response to a court order in a separate Judicial Watch case, Clinton declared under penalty of perjury that she had “directed that all my emails on clintonemail.com in my custody that were or are potentially federal records be provided to the Department of State, and on information and belief, this has been done,” Judicial Watch noted in the press release.

An example of classified material uncovered by Judicial Watch is information that Jake Sullivan, Clinton’s top foreign policy adviser, sent in a Jan. 26, 2010, email to Abedin.

This material, which appeared in other emails, resurfaced in the new production of emails, a spokesperson for Judicial Watch told The Daily Signal in a phone interview.

In the email, Sullivan described how he had “pasted” a document from a written summary sent to him by former British Prime Minister Tony Blair about conversations with then-Prime Minister Gordon Brown and Irish leaders on the peace process in Northern Ireland.

As previously reported, Clinton also received emails from Sid Blumenthal, a confidant and former senior adviser to President Bill Clinton, her husband. The Obama administration had barred Blumenthal from serving in the State Department under Clinton.

Blumenthal sent a April 8, 2010, email to Clinton, marked as “confidential,” about a change of government in Kyrgyzstan.

The newly revealed emails include a classified email June 13, 2009, from Sullivan to Clinton and Mills involving Sullivan’s discussions with Northern Ireland leaders.

Also in the New Documents

The new documents contain information about a CIA team killed in an al-Qaeda terrorist attack, according to Judicial Watch:

In a December 30, 2009, email exchange, senior adviser Phillippe Reines disclosed to Clinton and Abedin that the seven individuals killed in an al-Qaeda attack in Khost, Afghanistan, were in fact CIA personnel. The CIA had been trying to keep this fact secret.

Reines wrote: ‘To the extent it’s currently being reported, they are being identified as DOD [Department of Defense] personnel, not Agency [CIA].’ He goes on to say that CIA Director Leon Panetta’s chief of staff, Jeremy Bash, told Reines that ‘The details are thin and he [Bash] couldn’t get into specifics on an open line, but they believe the contact they met with set them up and was either carrying the explosive or detonated it.’

Judicial Watch also said one email suggests Bill Clinton had a conflict of interest in editing one of his wife’s speeches:

On June 28, 2009, Bill Clinton’s aide Justin Cooper emailed Hillary Clinton, with a copy to her household assistant Oscar Flores, edits made by Bill Clinton to a speech Hillary was to give at the Council on Foreign Relations.

Cooper blind-copied Cheryl Mills on the email. Mills forwarded it to Sullivan with the warning: ‘I was BLIND COPIED ON THIS SO DO NOT FORWARD ETC.’

Bill Clinton’s involvement raises conflict of interest questions, Judicial Watch suggests, because he was heading up the Clinton Foundation at the time.