Trump’s Opportunity to Oust Those Who Covered Up Benghazi Missteps 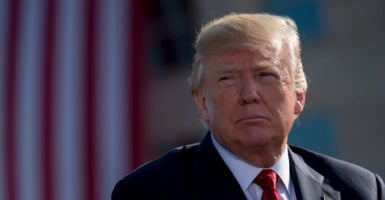 Since President Donald Trump has taken office, new information has emerged that could lead Trump to the source of the Benghazi cover-up. (Photo: Andrew Harrer/CNP/AdMedia /Newscom)

Now, Libya’s interim government is considering opening up Benghazi to foreign consulates again. But it’s hard to imagine foreign governments rushing to return to Benghazi. By 2013, when law and order in the city collapsed completely, no foreign diplomats remained.

While five years have passed, the legal repercussions of the attack and the cover-up are far from over.

The jury selection in the trial of Ahmed Abu Khattala, the only terrorist ever arrested for the attack, is just now getting under way in a Washington, D.C., federal court.

Meanwhile, recent interviews have revealed how ill-judged the Obama administration’s Libya policy was and how absolutely irresponsible Hillary Clinton’s State Department was to place its personnel at such mortal risk.

Earlier this month, Brad Owens and Jerry Torres of Torres Advanced Enterprise Solutions came forward with allegations that a Clinton State Department official told them after the Sept. 11, 2012, attack to keep silent with information they had regarding the security situation in Benghazi.

The company had been approached in August 2012 to remedy the clearly inadequate protection for staff working in Benghazi as al-Qaeda and other terrorist groups were fanning out all over the city.

Ambassador Christopher Stevens in an email in July 2012 described the deteriorating situation and asked for a minimum of 13 armed guards, which the State Department turned down.

Torres Advanced Enterprise Solutions provides security for U.S. embassies around the world. In the case of Benghazi, it had been outbid by 4 percent by a tiny British company, Blue Mountain Group, based in Wales.

Blue Mountain failed miserably to take care of the job, and did not even provide guards with weapons.

By the time Torres was called in, it was too late. According to Owens and Torres, in the days after the Sept. 11 attack, the two were summoned by State Department contracting officer Jan Visintainer and told to keep silent about what they knew.

Even after the tragic events in Benghazi, she asked them to endorse a policy of keeping embassy guards unarmed.

Fearing for their other contracts, Owens and Torres kept quiet about what they knew until now.

But with the Trump administration now in place and with Secretary of State Rex Tillerson working to reform the State Department, there is now at least a chance to clean out the personnel who implemented Clinton’s disastrous miscalculations in Benghazi and covered up the State Department’s horrendous mistakes.