State Department Clamping Down on Speaking to Congress or Press? 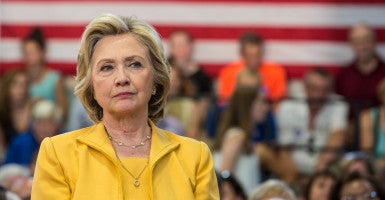 Hillary Clinton is scheduled to testify before the House Select Committee on Benghazi in October. (Photo: Keiko Hiromi/Polaris/Newscom)

The State Department has quietly issued a new policy that some insiders view as designed to keep employees from freely speaking to Congress or the press about Benghazi and former Secretary of State Hillary Clinton’s email controversy.

The State Department issued 19 pages of revised rules about official clearance for speaking, writing and teaching on July 27.

The new rules, first reported by Diplopundit, a blog that unofficially watches State Department leadership and management issues, say in part: “Employee testimony, whether in an official capacity or in a personal capacity on a matter of Departmental concern may be subject to the review requirements of this subchapter. Employees should consult with the Department of State’s Office of the Legal Adviser or [U.S. Agency of International Development’s] Office of the General Counsel, as appropriate, to determine applicable procedures.”

According to the pseudonymously published Diplopundit, “In practical terms, we think this means that if you get summoned to appear before the House Select Benghazi Committee and is testifying in your personal capacity as a former or retired employee of the State Department, these new regulations may still apply to you, and you may still need clearance before your testimony.”

“It’s an absolute overreach,” says Rep. Jason Chaffetz, chairman of the House Oversight and Government Reform Committee. His committee has jurisdiction over numerous issues that may call for testimony from current and former State Department employees.

“They should be able to talk to the media, they should be able to speak to Congress,” the Utah Republican said. “They have an absolute and total right to interact with Congress. There are whistleblower protections. That’s not a balanced approach to current and former employees’ rights.” State Department Deputy Spokesperson Mark Toner says the reason for the revisions is actually “to underscore that the Department encourages employees to engage with the public on matters related to the nation’s foreign relations.”

“The revised policies and procedures are more protective of employee speech as they establish a higher bar for limiting employees’ writing or speaking in their personal capacity, while also recognizing changing technologies in communication, such as social media,” Toner said in a statement to Daily Signal.

Toner also said the revisions do not change the procedures employees must follow before testifying in court or before Congress but “streamline the review process and also remind employees about existing rules regarding the disclosure of classified and other protected information.”

Current and former State Department officials have been quietly called to testify behind closed doors before the House Select Committee on Benghazi. Clinton is scheduled to testify in October. Her use of a private email server for government business, deletion of tens of thousands of emails without independent review, and possible unsecured transmittal of classified information are the subject of multiple investigations.

Written into the revised State Department regulation is the threat that an employee or former employee speaking to Congress or the press outside the policy could be fired and criminally prosecuted. “Noncompliance may result in disciplinary action, criminal prosecution and/or civil liability,” reads one section.

At the very least, it will have a “chilling effect,” one former State Department official (who did not want to be identified) told me.

Chaffetz called the penalty clause “threatening and over the top.”

This story was updated to include a quote from the State Department.