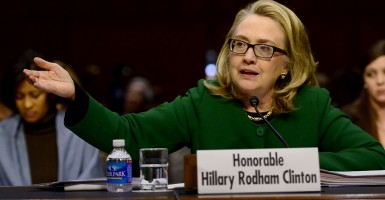 As the House Select Committee on Benghazi prepares for its first hearing this week, a former State Department diplomat is coming forward with a startling allegation: Hillary Clinton confidants were part of an operation to “separate” damaging documents before they were turned over to the Accountability Review Board investigating security lapses surrounding the Sept. 11, 2012, terrorist attacks on the U.S. mission in Benghazi, Libya.

According to former Deputy Assistant Secretary Raymond Maxwell, the after-hours session took place over a weekend in a basement operations-type center at State Department headquarters in Washington, D.C. This is the first time Maxwell has publicly come forward with the story.

At the time, Maxwell was a leader in the State Department’s Bureau of Near Eastern Affairs, which was charged with collecting emails and documents relevant to the Benghazi probe.

“I was not invited to that after-hours endeavor, but I heard about it and decided to check it out on a Sunday afternoon,” Maxwell says.

He didn’t know it then, but Maxwell would ultimately become one of four State Department officials singled out for discipline—he says scapegoated—then later cleared for devastating security lapses leading up to the attacks. Four Americans, including U.S. Ambassador Christopher Stevens, were murdered during the Benghazi attacks.

Maxwell says the weekend document session was held in the basement of the State Department’s Foggy Bottom headquarters in a room underneath the “jogger’s entrance.” He describes it as a large space, outfitted with computers and big screen monitors, intended for emergency planning, and with small offices on the periphery.

“She told me, ‘Ray, we are to go through these stacks and pull out anything that might put anybody in the [Near Eastern Affairs] front office or the seventh floor in a bad light,’” says Maxwell. He says “seventh floor” was State Department shorthand for then-Secretary of State Clinton and her principal advisers.

“I asked her, ‘But isn’t that unethical?’ She responded, ‘Ray, those are our orders.’ ”

In an interview Monday morning on Fox News, Rep. Jason Chaffetz, R-Utah, named the two Hillary Clinton confidants who allegedly were  present: One was Cheryl Mills, Clinton’s chief of staff and a former White House counsel who defended President Bill Clinton during his impeachment trial. The other, Chaffetz said, was Deputy Chief of Staff Jake Sullivan, who previously worked on Hillary Clinton’s and then Barack Obama’s presidential campaigns.

“When Cheryl saw me, she snapped, ‘Who are you?’” Maxwell says. “Jake explained, ‘That’s Ray Maxwell, an NEA deputy assistant secretary.’ She conceded, ‘Well, OK.'”

Maxwell says the two officials, close confidants of Clinton, appeared to check in on the operation and soon left.

Maxwell says after Mills and Sullivan arrived, he, the office director and an intern moved into a small office where they looked through some papers. Maxwell says his stack included pre-attack telegrams and cables between the U.S. embassy in Tripoli and State Department headquarters. After a short time, Maxwell says he decided to leave.

We contacted Mills and Sullivan to ask about the allegations and the purpose of the described separation of documents, but they did not return calls or emails. We reached out to Clinton, who declined an interview request and offered no comment. A State Department spokesman told us it would have been impossible for anybody outside the Accountability Review Board (ARB) to control the flow of information because the board cultivated so many sources.

When the ARB issued its call for documents in early October 2012, just weeks after the Benghazi attacks, the executive directorate of the State Department’s Bureau of Near Eastern Affairs was put in charge of collecting all emails and relevant material. It was gathered, boxed and—Maxwell says—ended up in the basement room prior to being turned over.

In May 2013, when critics questioned the ARB’s investigation as not thorough enough, co-chairmen Ambassador Thomas Pickering and Adm. Mike Mullen responded that “we had unfettered access to everyone and everything including all the documentation we needed.”

Maxwell says when he heard that statement, he couldn’t help but wonder if the ARB—perhaps unknowingly—had received from his bureau a scrubbed set of documents with the most damaging material missing.

An attacker celebrates as buildings and cars burn at the consulate compound in Benghazi late Sept. 11, 2012. (Photo: Getty Images/Newscom)

Maxwell also criticizes the ARB as “anything but independent,” pointing to Mullen’s admission in congressional testimony that he called Mills to give her inside advice after the ARB interviewed a potential congressional witness.

In an interview in September 2013, Pickering told me that he would not have done what Mullen did. But both co-chairmen strongly defend their probe as “fiercely independent.”

Maxwell also criticizes the ARB for failing to interview key people at the White House, State Department and the CIA, including not only Clinton but Deputy Secretary of State Thomas Nides, who managed department resources in Libya; Assistant Secretary of State for Political Military Affairs Andrew Shapiro; and White House National Security Council Director for Libya Ben Fishman.

“The ARB inquiry was, at best, a shoddily executed attempt at damage control, both in Foggy Bottom and on Capitol Hill,” Maxwell says. He views the after-hours operation he witnessed in the State Department basement as “an exercise in misdirection.”

Ambassador to Libya Christopher Stevens and three other Americans were murdered in Benghazi. (Photo: Newscom)

Sullivan did not respond to emails or to messages sent to him through his current teaching job at Yale Law School. Mills did not respond to a message passed to her through Black Rock, a major global investment firm where she is on the board of directors. Clinton’s press officer ultimately referred us to the State Department, though none of the three currently works there.

A State Department spokesman, Alec Gerlach, calls the implication that documents were withheld “totally without merit.” Gerlach says: “The range of sources that the ARB’s investigation drew on would have made it impossible for anyone outside of the ARB to control its access to information.”

“The allegations are as serious as it gets,” says one lawmaker of the alleged Benghazi document review.

Gerlach says the State Department instructed all employees to cooperate “fully and promptly” with the ARB, which invited anyone with relevant information to contact the board directly.

“So individuals with information were reaching out proactively to the board. And, the ARB was also directly engaged with individuals and the [State] Department’s bureaus and offices to request information and pull on whichever threads it chose to,” Gerlach says.

Maxwell says he has been interviewed privately by several members of Congress in recent months, including Chaffetz, a member of the House Oversight Committee, and Rep. Trey Gowdy, R-S.C., chairman of the House Select Committee on Benghazi.

When reached for comment, Chaffetz told me that Maxwell’s allegations “go to the heart of the integrity of the State Department.”

“The allegations are as serious as it gets, and it’s something we have obviously followed up and pursued,” Chaffetz says. “I’m 100 percent confident the Benghazi Select Committee is going to dive deep on that issue.”

Maxwell, 58, strongly supported President Barack Obama and personally contributed to his presidential campaign. But post-Benghazi, he has soured on both Obama and Clinton, saying he had nothing to do with security and was sacrificed as a scapegoat while higher-up officials directly responsible escaped discipline.

Maxwell spent a year on paid administrative leave with no official charge ever levied against him. Ultimately, the State Department cleared Maxwell of wrongdoing and reinstated him. He retired a short time later, in November 2013.

Maxwell worked in foreign service for 21 years as the well-respected deputy assistant secretary for Maghreb Affairs in the Near East Bureau and is a former chief of staff to the ambassador in Baghdad. Fluent in Portuguese, Maxwell is a Navy “mustanger,” which means he successfully made the leap from the enlisted ranks to commissioned officer.

Maxwell also is a prolific poet. While on administrative leave, he published poems online: allegories hinting at his post-Benghazi observations and experiences.

A poem entitled “Invitation” refers to his placement on  leave in December 2012: “The Queen’s Henchmen / request the pleasure of your company / at a Lynching — / to be held / at 23rd and C Streets NW [State Dept. building] / on Tuesday, December 18, 2012 / just past sunset. / Dress: Formal, Masks and Hoods — / the four being lynched / must never know the identities/ of their executioners, or what/ whose sin required their sacrifice./ A blood sacrifice — / to divert the hounds- / to appease the gods — / to cleanse our filth and /satisfy our guilty consciences…”

In another poem called “Trapped in a purgatory of their own deceit,” Maxwell wrote: “The web of lies they weave / gets tighter and tighter / in its deceit / until it bottoms out — / at a very low frequency — / and implodes…Yet all the while, / the more they talk, / the more they lie, / and the deeper down the hole they go… Just wait…/ just wait and feed them the rope.”

Maxwell in Algiers in 2011 as deputy assistant secretary for the Maghreb region. (Photo: YouTube via U.S. Embassy in Algiers)

Several weeks after he was placed on leave with no formal accusations, Maxwell made an appointment to address his status with a State Department ombudsman.

“She told me, ‘You are taking this all too personally, Raymond. It is not about you,’ ” Maxwell recalls.

“I told her that ‘My name is on TV and I’m on administrative leave, it seems like it’s about me.’ Then she said, ‘You’re not harmed, you’re still getting paid. Don’t watch TV. Take your wife on a cruise. It’s not about you; it’s about Hillary and 2016.’ “

Since retiring from the State Department, Maxwell has obtained a master’s degree in library information science.