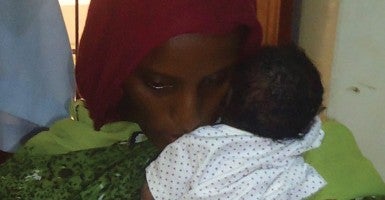 Christian woman Meriam Ibrahim Ishag and her newborn baby girl that she gave birth to in jail. (Photo: STR/EPA/Newscom)

Meriam Yahia Ibrahim Ishag, the 27-year-old mother of two condemned to death for her Christian faith, was freed after a court in Sudan ordered her release — only to be re-arrested hours later.

Ishag was re-arrested at an airport  in Khartoum as she, her husband, U.S. citizen Daniel Wani, and their children, Martin and Maya, were trying to leave Sudan, CNN reported.

More than 40 officers stopped, detained and interrogated her,  her legal team said. She is being held at a national security office in the capital city with her family, who insisted on accompanying her.

It is not clear  why Ishag, Wani, and their children were stopped.

“Her family had been threatened before and we are worried that someone might try to harm her,” Mostafa said.

>>> At White House Rally, Lawmakers Ask Obama to Save Christian Mom in Sudan

In May, a Sudanese court sentenced Ishag to 100 lashes for adultery for marrying a Christian man and to death by hanging for apostasy for refusing to renounce her Christian faith. She was given two years to live after giving birth to her daughter, Maya, while in shackles. Ishag’s 22-month-old son, Martin, and newborn daughter also were imprisoned.

Wani, her husband, was born in Sudan but became a naturalized U.S. citizen in 2005. He resides in New Hampshire while his wife, a physician, awaits a visa to emigrate to the United States.

Just one day after Sen. Ted Cruz, R-Texas, and Franks joined Christian groups for a rally outside the White House in support of Ishag, Kerry issued a statement appealing to the Sudanese government.

“I urge the Sudanese judiciary and government to respect Ms. Ishag’s fundamental right to freedom of religion,” he said.

President Obama has not commented on the case.

I am very pleased that the Sudanese court has reportedly cancelled Meriam Ibrahim’s death sentence and ordered her release. I continue to urge U.S. officials to work quickly and use all resources available to immediately provide Meriam and her family with safe haven in the United States.

Faith J.H. McDonnale, director of religious liberty at the Institute on Religion and Democracy, which rallied in front of the White House, said:

In the plight of Meriam, the effects of Shari’a were personalized in the form of a courageous young wife and mother. The world reacted with outrage to just one example of the egregious human rights violations of the Shari’a state. It is time to connect the dots to the human rights violated by Shari’a all over the world.