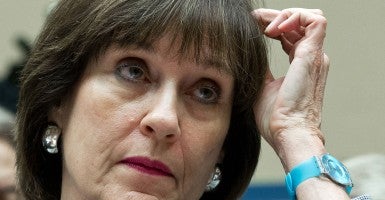 During Lerner’s tenure at the IRS, tea party groups applying for tax-exempt status routinely were subjected to additional scrutiny and delays in their applications. The IRS informed Congress last week that it had lost an unknown number of emails from Lerner.

Now, as congressional Republicans call on the Department of Justice to open an investigation into the computer crash, Attkisson, a Daily Signal senior independent contributor, explained exactly what information investigators should seek regarding Lerner’s missing emails:

In testimony before the House Oversight and Government Reform Committee in March, IRS Commissioner John Koskinen told lawmakers agency emails “get taken off and stored in servers.” Yet the IRS  said Lerner’s correspondence, sent between January 2009 and April 2011, is irretrievable.

Congressional investigators are working to determine whether Lerner acted alone or on orders handed down by the White House. House Ways and Means Chairman Dave Camp, R-Mich., said in a statement Friday the IRS’ loss of documents makes it more difficult for investigators to determine who, besides Lerner, was involved in the scandal.

Lerner testified twice on Capitol Hill about the targeting, but invoked the Fifth Amendment both times. In May, the House voted to hold her in contempt for refusing to cooperate with investigations.