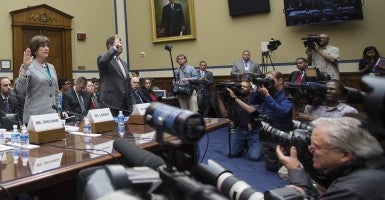 Lois Lerner at a May 22, 2013 Oversight and Reform Committee Hearing, 'The IRS: Targeting Americans for their Political Beliefs.' (Photo: OversightandReform Flickr)

The Daily Caller has obtained an email that provides more stark evidence of the liberal bias of Lois Lerner, the former IRS official at the heart of the agency’s targeting of Tea Party and other conservative organizations that applied for tax-exempt status.  Although Lerner was hypersensitive about political activity by conservatives, she appears to have taken almost no action after being notified that labor organizations were failing to inform the IRS about millions of dollars of political spending.

Labor unions, which are classified as 501(c)(5) organizations under the tax code, are required to file a Form 990 tax return with the IRS.  In Part IV of that form, unions are asked whether they engaged in “direct or indirect political campaign activities.”  If so, they have to prepare a detailed schedule outlining those activities, including the amounts spent on such activities.

The U.S. Department of Labor also has a similar type of annual financial form.  Labor unions with over $250,000 in receipts have to file an LM-2 Labor Organization Annual Report.  Item 51 on that form requires a union to report the amounts spent on “Political Activities and Lobbying.”  The explanation that accompanies the form says that includes all “direct and indirect disbursements to all entities and individuals … associated with political disbursements or contributions in money.”  Just like the IRS Form 990, unions have to prepare a detailed schedule outlining the disbursements. Indeed, my Heritage colleague James Sherk notes that “the Labor Department largely followed the IRS’s definition of ‘political activity’  when it updated its union transparency regulations.”

According to the Daily Caller, Lerner received a complaint in 2007 pointing out that a number of unions were reporting large amounts of political disbursements to the Labor Department, yet reporting no such expenditures to the IRS:

“Also in 2006 the Teamsters Union reported no political expenditures with the IRS while at the same time reporting $7,081,965 with the Labor Department.

“In 2005, the National Education Association also reported no political expenditures with the IRS while at the same time reporting $24,985,250 with the Labor Department.”

Although Lerner had to admit that the definition of political activity required to be reported to the IRS “coincides” with the definition of political activity used by the Labor Department, she tried to excuse these huge discrepancies by saying that the Labor Department form included both political activity and lobbying disbursements and the  “Form LM-2 does not separate this reporting from the reporting of lobbying expenditures.” But in fact, the very detailed Schedule 16 that accompanies the LM-2 breaks down such disbursements, so the IRS could track political expenses vs. lobbying expenses if Lerner had bothered to actually look at, for example, the AFL-CIO’s 2006 LM-2, which is available here. It included activities like “Subsidy – Election’06 Member Mobilization Effort,” and “Election’06 Ten Point Program – Elect Ciro Rodriguez ” and “Election Mailings — $150,000.”

It is true that Lerner said that there were “some instances that raised concerns” and she referred that information to the Dallas office, but the Dallas IRS office apparently did nothing about it.  Lerner was the head of the tax-exempt organizations office at the national headquarters of the IRS, making her the chief official responsible for regulating these labor unions.  Why was she so dismissive of a complaint showing that labor unions were potentially not reporting millions of dollars of political activity to the IRS?  And why was the issue referred to a satellite office of the IRS?  Why didn’t she follow up when nothing was done about it?  Why wasn’t a major IRS investigation opened up in Washington?

Filing a false statement on a tax return is a very serious violation of federal law that can be punished with everything from civil penalties to prison time depending on the circumstances and the intent of the filer.  And Lerner had just received information about multiple violations by multiple organizations.

Given all of the information that we have today, particularly the prior emails that revealed Lerner’s hatred of conservatives, does anyone believe that if Lerner had received a complaint alleging that many Tea Party organizations were failing to report millions of dollars in “direct or indirect political campaign activities,” the complaint would have been handled this way? That is just a bit hard to believe.