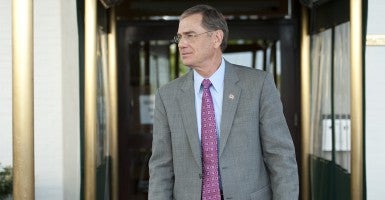 Calling a secretive government operation to strangle politically out-of-favor businesses “more dangerous” than the IRS targeting scandal, a congressman with a background in banking is preparing to introduce legislation to kill the Obama administration initiative.

“I believe this activity is probably more dangerous and more disastrous than that of the IRS scandal because this is running people out of business for no reason and it’s harming livelihoods, incomes [and] families,” Rep. Blaine Luetkemeyer, R-Mo., said today in an interview with The Daily Signal.

Luetkemeyer, a member of the House Financial Services Committee, was comparing the Department of Justice’s Operation Choke Point to the Internal Revenue Service’s much-reviled targeting of tea party and other conservative groups.

>>> Update: Luetkemeyer introduced his bill, announcing that it would “restore the balance between financial institutions and regulators and protect private industry from the [administration’s] organized bureaucratic intimidation and regulation.”

Operation Choke Point seeks to cut off the financial lifeblood of payday lenders and other industries the Obama administration doesn’t like by pressuring banks to close their accounts with such businesses.

As a leader in the probe of Choke Point, Luetkemeyer within days intends to introduce a bill to guarantee a “safe harbor” for banks to do business with enterprises targeted by the Obama administration. He told The Daily Signal:

The bill is an updated version of legislation submitted by Luetkemeyer in June.

“This one will be more effective and garner more support,” he said. “It solves problems that are there with the present bill.”

Having worked in the banking industry for more than 30 years, and as a bank regulator in Missouri, Luetkemeyer counts himself familiar with the issues at hand:

I understand the banking mentality and the activities that go on. This issue was brought to me by the payday lending industry and the banks that service them. But looking into Operation Choke Point, I eventually found that it was more than just the payday lending industry. There was actually a whole list [of businesses] that was on the FDIC’s website.

Luetkemeyer was referring to a list of 30 examples of “high risk” activities posted on the website of the Federal Depositors Insurance Corporation. After coming under congressional scrutiny, the FDIC, the agency responsible for regulating and auditing more than 4,500 banks, removed the list. A House report May 29 found that by categorizing coin dealers, gun sellers and short-term lenders as “high risk”—and equating them with explicitly illegal or offensive activities such as Ponzi schemes, pornography and racist materials—the FDIC, as part of Operation Choke Point, “effectively transformed this guidance [to banks] into an implicit threat of federal investigation.”

Luetkemeyer and other Choke Point critics argue that although the FDIC removed its “guidance” list of high-risk enterprises, banks still lack necessary protections from such guidelines—and so continue to terminate relationships with those industries.

“The examiners and the DOJ believe that there’s something unethical or immoral about these industries in the way that they view the world—there’s an ideological bent against them,” Luetkemeyer said, adding of those government officials:

They’re allowed to have their personal opinion. The problem is, that’s not the legal law. Their job is to enforce the law the way it’s written. They don’t have the right to go out and make moral judgments on these businesses—that’s up to culture in our society.

With his bill, Luetkemeyer said he hopes to provide banks with the legal protections necessary to push back against Operation Choke Point.

Specifically, the Missouri Republican said his bill would:

1.     Require bank examiners to provide a legal or material basis for suggesting or requesting that banks terminate financial relationships with certain customers. This would prevent banks from closing accounts on the grounds of a “reputational risk” alone, one result of Operation Choke Point.

2.    Require bank examiners to go on the record and state reasons when they determine banks need to end relationships with certain customers.

3.     Clarify regulatory guidelines by requiring examiners and regulators such as the FDIC to define “reputational risk” so that the term can’t be applied as a blanket rationale for closing accounts with certain enterprises.

4.     Amend a 1989 law regulating banks, the Financial Institutions Reform, Recovery and Enforcement Act, to restrict bank examiners’ ability to look at certain issues unless they could harm banking as opposed to merely affect banking.

>>> Commentary: Wrongdoers at IRS Get Away Scot-Free