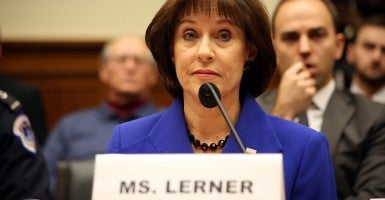 New emails obtained by Congress show IRS official Lois Lerner, acting on misdirected correspondence, suggested auditing a Republican senator who has been critical of the Obama administration on a range of issues.

The emails indicate Lerner received an invitation that was intended for Grassley. The event’s organizers offered to pay for Grassley’s wife to attend, which drew Lerner’s attention.

A message Lerner sent to several other IRS officials shows she suggested the agency audit Grassley because of the proposed compensation.

“Looked like they were inappropriately offering to pay for his wife,” she wrote. “Perhaps we should refer to Exam?”

“Exam” is IRS jargon for considering an audit.

Matthew Giuliano, an IRS manager at the time, shot down Lerner’s suggestion. He said the organization’s offer to pay for Grassley’s wife was “not prohibited on its face.” Instead, he suggested the IRS wait for “(i) Grassley to accept and attend the speaking arrangement, and (ii) then determine whether [name redacted] issues him a 1099.”

A 1099 is a form taxpayers must file with the IRS if they receive income from a source other than their employer.

Attention to Lerner’s obtainable emails come as the House Ways and Means Committee continues to investigate her involvement with inappropriate IRS targeting of tea party and conservative groups applying for tax-exempt status.

Ways and Means Chairman Dave Camp, R-Mich., called Lerner’s attention to Grassley another example of her using her position at the IRS to target conservatives.

“We’ve seen a lot of unbelievable things in this investigation, but the fact that Lois Lerner attempted to initiate an apparently baseless IRS examination against a sitting Republican United States senator is shocking,” Camp said in a statement. “At every turn, Lerner was using the IRS as a tool for political purposes in defiance of taxpayer rights”

According to Grassley’s office, the senator declined the unnamed organization’s invitation to attend the event. Grassley said of Lerner’s emails:

This kind of thing fuels the deep concerns many people have about political targeting by the IRS and by the officials at the highest levels. It’s very troubling that a simple clerical mix-up could get a taxpayer immediately referred for an IRS exam without any due diligence from agency officials.

Grassley is a member of the Senate Finance Committee, which is among congressional panels probing the IRS targeting scandal.

In a statement to Fox News, the IRS said it does not conduct audits based on the recommendations of one person:

As a general matter, the IRS has checks and balances in place to ensure the fairness and integrity of the audit process. Audits cannot be initiated solely by personal requests or suggestions by any one individual inside the IRS.

Republicans have grown increasingly frustrated with the tax agency after it notified Congress two weeks ago that it had lost two years of emails from Lerner and several other officials. The agency blamed the missing correspondence on a hard drive crashes.

The time period of the lost emails — from January 2009 to April 2011 —  covers the months when Lerner and the IRS are accused of targeting tea party groups.