South Africa Is Losing the War Against Corruption 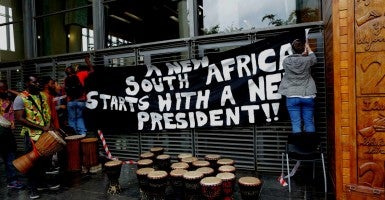 Tyler Yeatts is currently a member of the Young Leaders Program at The Heritage Foundation.

Once a model for emerging African democracies, South Africa is now mired in corruption that undermines its economy, provokes social unrest, and betrays the dreams and trust of millions of South Africans.

South African President Jacob Zuma easily survived an April 5 impeachment vote in parliament, thanks to the large majority party he heads, the African National Congress (ANC). The ANC, the party of Nelson Mandela, has dominated South African politics since the end of apartheid in 1994.

The impeachment was in response to President Zuma using more than $20 million in public funds to improve his private mansion. Zuma defended the upgrades as necessary for ensuring his security, yet the improvements included a swimming pool and amphitheater, among other amenities. Late last month, the Constitutional Court of South Africa rebuked Zuma, instructing him to abide by a 2014 ruling he had ignored from South Africa’s anti-corruption body that required him to repay some of the money.

Unfortunately for Zuma, his mansion upgrade is not the only scandal in a string of controversies dating back more than a decade. Critics claim an inner circle of wealthy confidants has undue influence on the president, and therefore the government.

Top of the list are the Gupta brothers—Ajay, Atul, and Rajesh. The brothers migrated to South Africa from India beginning in 1993. Their business, Sahara Computers, began as a small IT distributor but has grown to include mining operations, a televised news station, and a newspaper.

The Guptas have been as adept at making powerful political friends as they have in building a business empire. They had high-level ties with the previous South African administration, and cultivated a close friendship with Zuma before he became president, a relationship that has continued through his seven years in office. The Guptas also have a number of business links with Zuma’s son, Duduzane, and daughter, Duduzile. The families have become so intertwined that many refer to them simply as the “Zuptas.”

A former member of South Africa’s Parliament in March accused a member of the Gupta family of offering her a ministerial appointment in 2010. Several days later, South African Deputy Finance Minister Mcebisi Jonas made a similar charge, claiming the Guptas offered him the position of finance minister in Nov. 2015, which he turned down. Then-Finance Minister Nhlanhla Nene was ousted a month later.

If the recent Gupta allegations are true, it means they have such powerful and personal influence with Zuma—the president of Africa’s 2nd-largest economy— that they wield extraordinary influence in filling cabinet positions.

The Gupta accusations have enlivened the fissured political opposition in South African. Even so, the results of the impeachment vote show that the opposition’s power remains limited. Thousands of South Africans have poured into the streets of cities across the country demanding Zuma’s resignation, but he has weathered the storm thus far, though there are rumblings the ANC may be moving to abandon him.

In the Heritage Foundation’s annual Index of Economic Freedom, which measures the impact of economic freedom around the globe, South Africa’s score has been declining over the last decade. Unsurprisingly, one of the leading contributor’s to South Africa’s worsening score is its performance in the “Freedom from Corruption” metric, which has dropped seven percent since Zuma took office in 2009, and hit all-time lows in 2013.

The ANC must recognize the severity of the problem and make urgent reforms that will in turn facilitate economic and social opportunity for all its citizens, not just well-connected elites.