Podcast: Why Are Western Nations Pushing Abortion on Africa? 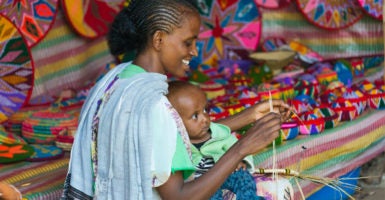 A woman carrying a child and weaving a basket in Aksum, Ethiopia. (Photo: Danita Delimont Photography/Newscom)

Western funding for “population programs” in Africa has historically been the lowest of all aid initiatives, dwarfed by much more critical needs like clean water, sanitation, and education.

But now, these “population programs”—which include contraceptives and abortion—are the most highly funded on the continent, with groups like the Gates Foundation and Planned Parenthood pushing dangerous forms of birth control on populations that often don’t understand what they’re being given, or what the potential side effects will be.

Why are leftist groups doing this? Obianuju Ekeocha joins the podcast to uncover a story the Western world needs to hear.