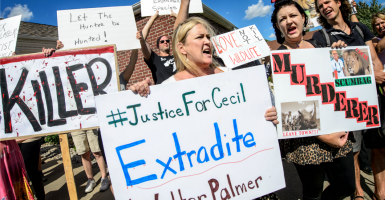 Lost in the outrage over the death of Cecil the Lion is the plight of the people of Zimbabwe and the fact that big game hunting actually helps Africa.

On July 1, a lion known as Cecil, who was popular with safari-goers in Zimbabwe, was killed by a hunter after being lured out of a national park.

The story made newspapers worldwide, and the internet convulsed in outrage. The hashtag #CecilTheLion trended for two days on Twitter. Online warriors flooded the Yelp page of hunter Walter Palmer’s dentistry practice with negative reviews. A makeshift shrine to Cecil popped up at Palmer’s office.

Today, another American hunter, Sabrina Corgatelli, who has posted photos of her kills of African animals on Facebook, is receiving similarly bilious treatment.

This sort of intense but usually ephemeral outpouring of interest and emotion—enabled by the power of social media—around a cause occurs frequently enough to have spawned a portmanteau to capture the phenomenon: “slacktivism.”

In 2008, Zimbabwean inflation hit 250 million percent, and 90 percent of the population was unemployed in the formal sector.

Africa in particular seems to provoke slacktivist campaigns, such as the #BringBackOurGirls outcry in April last year, which focused on hundreds of kidnapped Nigerian schoolgirls, or the Kony 2012 campaign, which highlighted the brutal Lord’s Resistance Army.

The #CecilTheLion campaign is a perfect example of slacktivism, as well as its new nadir. Zimbabwe has suffered under the iron fist of a despot for nearly 35 years, and its people’s plight has never trended on Twitter or provoked a fraction of the outrage the killing of a lion has received.

The Suffering in Zimbabwe

Zimbabwean President Robert Mugabe, a liberation struggle icon, came to power in 1980. His misrule has turned the country—once the breadbasket of southern Africa— into one of the world’s poorest. In 2008, Zimbabwean inflation hit 250 million percent, and 90 percent of the population was unemployed in the formal sector. Approximately 2 million people, or one-sixth of the population, fled.

This rank incompetence would be bad enough, but Mugabe’s list of crimes includes subjugation and murder. Recently unearthed documents finger Mugabe as the architect of a 1983 massacre of more than 20,000 people from the Ndebele tribe who supported Mugabe’s political opponent. He has repeatedly unleashed his thugs against Zimbabwe’s white minority, driving thousands of them from farms that had often been in those families for generations.

Legal hunting pumps millions of dollars every year into African economies, some of which is used for conservation efforts.

The violence he routinely employs against his political opposition during elections reached a peak in 2008, when more than one hundred opposition supporters were killed, hundreds of others disappeared and thousands were beaten and intimidated by his party’s cadres.

All of this carnage has led Archbishop Desmond Tutu, a leader of the anti-apartheid struggle in South Africa and one of the world’s great heroes, to label Mugabe “a caricature of an African dictator” and a “Frankenstein.”

In addition to its overblown and morally shallow outrage, the #CecilTheLion campaign has also confused people about the nature of the wildlife crisis in Africa.

Legal hunting is not a threat to the sustainability of African wildlife populations. In fact, it is an important conservation technique there, as it is in the United States, and is supported by the U.S. Fish and Wildlife Service and major environmental organizations such as the World Wildlife Fund and the International Union for Conservation of Nature. It brings a variety of benefits to local communities and pumps millions of dollars every year into African economies, some of which is used for conservation efforts. Zimbabwe alone earned $45 million from hunting in 2014, and South Africa earns about $510 million annually.

What is a mortal threat that deserves Cecil levels of attention is the poaching epidemic that is draining the continent of its wildlife. Between 2010 and 2012, poachers killed 100,000 African elephants, and many populations will be wiped out in a decade if trends continue. In 2007, 13 white rhinos were poached in South Africa’s Kruger National Park; in 2014, more than 1,200 were. The International Union for Conservation of Nature declared the western black rhino extinct in 2011 due to poaching, and the five remaining rhino species are in grave danger as well.

The situation is so bad that wildlife trafficking has become the fourth-largest organized crime in the world. In the midst of this poaching spree, the focus on Cecil seems akin to someone chaining himself to a tree to protect it from a logger while ignoring a fire leveling the rest of the forest.

By all means, let Walter Palmer face justice if he broke Zimbabwean law. But let the slacktivists wielding tweets and snarky Yelp reviews not distract from the repugnant Mugabe regime. Nor let them further confuse the issue of responsible wildlife management in Africa, or distract attention from poaching, the true source of danger for Africa’s animals.