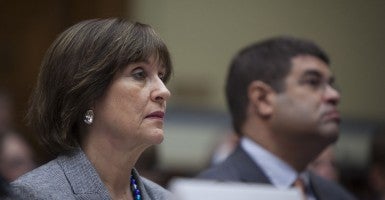 'Lost' emails: Lois Lerner in her appearance May 22, 2013, before the House Oversight & Government Reform Committee. (Photo: Committee via Flickr)

House Ways and Means Chairman Dave Camp, R-Mich., today accused the Internal Revenue Service of “lying” to the American people and attempting to hide the disappearance of two years of emails from Lois Lerner, former head of the agency’s tax exempt division.

“It looks like the American people were lied to and the IRS tried to cover up the fact it conveniently lost key documents in this investigation,” Camp and  Rep. Charles Boustany, R-La., chairman of the Oversight Subcommittee, said in a joint statement. “The White House promised full cooperation, the [IRS] commissioner promised full access to Lois Lerner emails, and now the agency claims it cannot produce those materials and they’ve known for months they couldn’t do this.”

Camp and Boustany also called for an independent prosecutor, saying, “Plot lines in Hollywood are more believable than what we are getting from this White House and the IRS.”

Congress voted to hold Lerner in contempt after she twice refused to testify. The IRS notified Congress of her missing emails Friday, blaming the disappearance  on a computer crash.

The news angered congressional investigators because the missing correspondence, sent between January 2009 and April 2011, is from the period during which tea party groups applying for tax-exempt status were subjected to additional IRS scrutiny and related delays in their applications.

Besides Lerner’s missing correspondence, IRS officials told Camp’s committee that the agency was unable to retrieve the emails of six other employees involved in the scandal. Among them: Nikole Flax, chief of staff to former acting Commissioner Steve Miller.

Flax, as Camp and Boustany said, made “frequent” visits to the White House. Miller ultimately was fired for his role in targeting the conservative groups, they noted.

As part of their investigation into the IRS, lawmakers are working to determine whether Lerner acted alone or on orders handed down by the White House or another executive branch agency. The “computer crash,” though, muddies lawmakers’ ability to determine who, in addition to Lerner, had roles in the scandal.

White House spokesman Josh Earnest appeared to brush off the development in a press briefing yesterday. “You’ve never heard of a computer crashing before?” he asked reporters.

Although Camp, Boustany and other Republican lawmakers are skeptical as to whether a crash actually occurred, and wonder openly whether the IRS is hiding the content of the missing emails, Earnest dismissed such notions as the “kinds of conspiracies that are propagated around this story.”

Ways and Means investigators, meanwhile, said the IRS knew of the destroyed emails back in February. The following month, IRS Commissioner John Koskinen told the House Oversight and Government Reform Committee that all agency emails “get taken off and stored in servers.” Koskinen told Ways and Means last month that he would produce all of Lerner’s messages.

The committee has called Koskinen to testify on the computer crash at a June 24 hearing.

In their statement, Camp and Boustany said:

Even when the IRS does admit something, they are not fully honest with us. Despite their attempt to bury the missing Lerner emails on page 15 of a 27-page letter that arrived late Friday, we now know documents from other central figures, like Nikole Flax, are missing. The fact that Ms. Flax was a frequent visitor to the White House and the Eisenhower Executive Office Building only raises more questions. Who was she visiting at the White House and what were they talking about? Was she updating the White House on the targeting or was she getting orders? These are answers we don’t yet have, because – surprise, surprise – a few computers crashed. Plot lines in Hollywood are more believable than what we are getting from this White House and the IRS.

This entire investigation has been slow-walked by the  [Obama] administration while they denied any wrongdoing and tried blaming ‘low-level’ workers in Cincinnati – all of which we have proven to be wrong. This entire case started with the White House and top Democrats in the Senate using the bully pulpit to bully law-abiding Americans because they dared to stand up for their own political beliefs. The only way for Democrats to have any credibility on this issue is to immediately give an independent prosecutor full access and full authority to investigate every angle of this case.