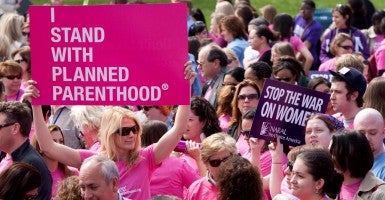 An undercover video was released Tuesday of a top official at Planned Parenthood discussing the sale of organs harvested from aborted babies.

But it is not the first time a scandal has surrounded the organization.

In its 2013-14 annual report, Planned Parenthood claimed it has “come a long way” as “our movement has come so far in nearly one hundred years—and we are building momentum.”

This momentum Planned Parenthood extols includes $528.4 million from government grants. According to its annual report, the organization provided 327,653 abortions nationwide and offered 1,880 adoption referrals in 2013.

1) Dr. Deborah Nucatola, Planned Parenthood’s senior director for medical services, was caught on tape detailing what happens to organs from fetuses that have been aborted. “I’d say a lot of people want liver. And for that reason, most providers will do this case under ultrasound guidance, so they’ll know where they’re putting their forceps,” Nucatola said in the undercover video. The Center for Medical Progress, a nonprofit organization devoted to medical ethics, released the video on July 14. Planned Parenthood has denied wrongdoing. “On the video, the Planned Parenthood staff member talks about standard reimbursement fees for costs associated with tissue donation programs, which every health care provider has and which the federal law provides for,” the organization said in a statement.

2) Multiple Planned Parenthood counselors advised underage teenage girls as young as 15 years old to engage in risky sexual practices, like asphyxiation and beating each other, as long as it was deemed consensual, according to an undercover investigation by the pro-life group Live Action. These counselors, according to the videos, also told the young girls to learn from watching Internet pornography and experiment by visiting sex shops, all without parental guidance. Planned Parenthood rebutted the assertion it was at fault. “This video does not reflect our education programs, the work our dedicated employees do every day, nor the experience shared by parents and teens who participate in our programs,” Betty Cockrum, president and CEO of Planned Parenthood of Indiana and Kentucky, told USA Today last year.

3) Planned Parenthood of the Rocky Mountains was sued in 2014 for failing to report an abusive relationship in which a 13-year-old girl was being sexually abused by her stepfather, who forced her to get an abortion when she became pregnant. The complaint alleged there were multiple warning signs, such as the girl being less than the legal age of consent in Colorado, the two going by different last names and the stepfather’s pressuring the daughter to go on birth control. According to the complaint, there were allegedly multiple instances the counselors could have asked the girl about their relationship. Instead, they stayed silent and gave her an abortion and birth control, allowing her to go home with her stepfather and continue to be sexually abused. Marie Logsden, vice president of communications at Planned Parenthood of the Rocky Mountains, told The Washington Times the clinic “can never comment on the care of an individual patient, due to privacy laws and our organization’s long-standing commitment to quality and confidentiality.”

4) Alisa LaPolt Snow, a lobbyist for Planned Parenthood, defended infanticide in 2013 as she stated that it was the choice of the “woman, family and physician” whether the infant who survived an abortion should be allowed to live, according to a Washington Post report. Snow shared this testimony in a hearing regarding a Florida bill named Infants Born Alive. The Washington Post’s Marc Thiessen added that only after a firestorm erupted in the conservative media did Planned Parenthood issue a statement that in the “extremely unlikely and highly unusual” event that a baby were born alive it would “provide appropriate care to both the woman and the infant.”

6) According to a Feb. 2, 2011, report from ABC News, Planned Parenthood fired a manager in 2011 after her involvement instructing a pimp and prostitute how to get around the system. As part of a sting set up by the pro-life group Live Action, a man and woman posed as sex traffickers seeking advice from Planned Parenthood workers in a New Jersey clinic. According to ABC News, the couple was overt about their work in the sex industry that involved undocumented immigrant girls. A Planned Parenthood worker encouraged them to lie about the age of the minors so that the organization would not have to legally report them to the authorities.

This article has been modified to include denials from Planned Parenthood and to include citations where appropriate.