Obama, Pondering Airstrikes, Says Iraq Must ‘Solve Its Own Problems’ 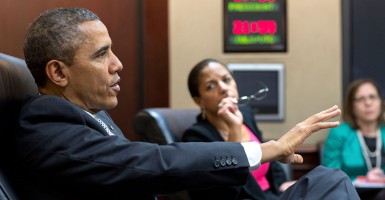 President Obama said today that short-term military action by the U.S. won’t fix Iraq, where that nation’s army is trying to fend off Islamist insurgents who have overrun much of the country and are advancing on Baghdad.

Obama, speaking on the White House lawn before a trip to North Dakota and California, said his national security team is reviewing options for military action, but that he will not send troops back into combat in Iraq.

“Any action we may take to provide assistance has to be joined by a serious effort by Iraq leaders to set aside sectarian differences to continue to build the capacity for a strong security force,” Obama told reporters. “We can’t do it for them. This should be a wake-up call. We will do our part, but it’s ultimately up to Iraq, as a sovereign nation, to solve its problems.”

The last U.S. troops withdrew from Iraq in 2011 after more than eight years of war.

Last weekend, insurgents with the Islamic State of Iraq and Syria (ISIS), a violent, al Qaeda-inspired militant group, swept across the border from Syria. They have captured Iraq’s second-largest city, Mosul, and are heading south toward Baghdad.

The president cautioned that deciding how to address the situation would take “several days.”

Obama said he would consult with Congress about possible airstrikes to thwart the insurgents’ advance, and that he realizes the stakes.

The situation, he said, “poses a danger to Iraq and its people and, given the nature of the terrorists, threats to American interests as well.”

Obama’s attention “may be too little, too late,”  said Steven Bucci, director of The Heritage Foundation’s Allison Center for Foreign Policy Studies, in part because of the souring of the president’s relationship with Iraqi Prime Minister Nouri al-Maliki.

“We should have leveraged the influence we had over the Maliki government when we had it,” said Bucci, a former Army Special Forces officer and top Pentagon official. “The Obama administration gave away that influence cavalierly, and the result is the rise of ISIS, debacle in Syria, and now the spread of this virus of radicalism back into Iraq.”