In 3 Charts, the Biggest Revelations From New Obamacare Study 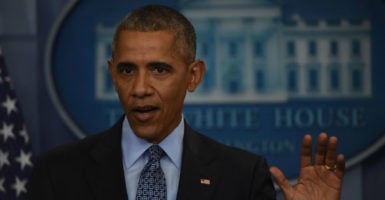 A report released Tuesday by the Department of Health and Human Services shows a significant hike in the average cost of individual plans since 2013 in 39 states. Twenty-four states had Obamacare premiums in 2017 that were double the average individual premium in 2013. In three states, the Obamacare premiums are now triple the average individual premium in 2013. President Barack Obama promised premiums would go down under Obamacare.

“You should know that once we [have Obamacare] fully implemented, you’re going to be able to buy insurance through a pool so that you can get the same good rates as a group that if you’re an employee at a big company you can get right now—which means your premiums will go down,” Obama said in 2012.

Grace-Marie Turner, president of the Galen Institute, a public policy research organization, told The Daily Signal in an email that Obamacare is flawed.

“The key promise the Obama administration made to Americans in the health reform debate was that their premium and health costs would go down,” Turner said, adding:

But year after year, families have seen their premiums soar. This new HHS study, looking at premium costs before and after Obamacare, proves that the law has failed dramatically to fulfill its promise.

Ronna McDaniel, chairwoman of the Republican National Committee, said in a statement that “This report proves what Republicans have been saying for years—Obamacare was sold on lies that failed to deliver for the American people.”

Bob Moffit, a senior fellow and health care expert at The Heritage Foundation, told The Daily Signal in an email that he is not surprised by the findings of the study.

“Obamacare has literally wrecked the individual market with skyrocketing premiums, crazy deductibles, restrictive physician networks, and a radical decline in plan participation and competition,” Moffit said. “The roots of the current crisis were baked into the law from the beginning, [along with] costly benefit mandates and inflexible insurance regulations.”

Drew Gonshorowski, a senior policy analyst at The Heritage Foundation, who studies Medicare and Medicaid, said he is also unsurprised.

“This study shows something that we’ve already known about the exchanges for some time now–that premiums have and continue to rise drastically,” Gonshorowski said in an email to The Daily Signal.

What we’re seeing with #Obamacare is more double digit premium increases. That’s why we’re on a rescue mission. pic.twitter.com/f3ROMVw3aK

In a report released Wednesday, the Congressional Budget Office estimates that the Republican Obamacare replacement plan, the American Health Care Act, will reduce budget deficits by $119 billion from 2017-2026.

Under Obamacare, the number of uninsured is estimated to be 28 million in 2026, according to the report, which estimates that number would rise to 51 million the same year if the American Health Care Act became law.

This article has been corrected to reflect the average cost for Obamacare premiums in 2017.