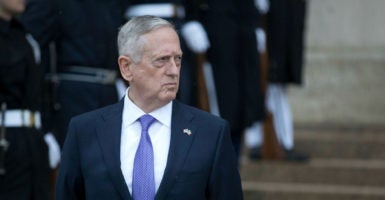 Secretary of Defense James Mattis has until July 1 to either delay or revoke his predecessor's change in policy on transgender individuals serving in the military. (Photo: Shawn Thew/Epa/Newscom)

Secretary of Defense James Mattis has an important decision to make soon, which may have significant readiness implications for the armed forces

On June 30, 2016, then-Secretary of Defense Ashton Carter announced a change in policy to allow transgender individuals to serve openly in the U.S. armed forces, effective at the latest by July 1, 2017.

Previous policy deemed those with “gender dysphoria” ineligible for service, and provided that they be automatically discharged if they had already joined in the military.

The American Psychiatric Association defines gender dysphoria as “a conflict between a person’s physical or assigned gender and the gender with which he/she/they identify.” It is the traditional clinical term for describing what many today understand to be transgenderism.

Carter’s unilateral decision came after years of pressure from transgender groups to change the policy. Although Carter reportedly discussed the change with the leaders of the military services before going public with the announcement, he admitted the decision was “his.”

Carter left the Pentagon on Jan. 20 with the departure of the Obama administration.

At his confirmation hearing in January to become the next secretary of defense, Mattis pledged his first priority would be to “strengthen military readiness,” adding “the primitive and often primalistic aspects of the battlefield test the physical strength, the mental ability of everyone.”

While Mattis stated he would carefully consider the decisions of his predecessors, he also indicated he would not feel bound by them.

Mattis has been extremely busy in his first four months in the Pentagon, overseeing two budget requests and numerous overseas visits to assure allies of our support and our adversaries of our resolve.

The Pentagon has been leading multiple strategy reviews of U.S. policy toward Afghanistan, the Islamic State, and North Korea.

Even accounting for his legendary work ethic, it is altogether likely Mattis has not had a chance to consider carefully the implications of a new transgender entrance policy on the short- and long-term readiness of the military.

Certainly, he does not have a new team to advise him on the subject, with only five presidentially nominated, Senate-confirmed civilian leaders in position today (including himself).

Moreover, it is not clear that Carter considered all necessary dimensions before he made his far-reaching decision last year. The news conference he conducted to announce the change focused more on transgender individuals and their desire to serve, rather than the primary and more important issue of military readiness.

Some who supported Carter’s decision pointed to the military’s looming personnel shortfall as a reason to expand eligibility. And to be sure, the military is facing such a shortfall.

With every passing year, a smaller percentage of Americans are eligible to serve. This owes to rising rates of obesity, lack of high school degrees, disqualifying medical conditions, drug use, and crime records.

These reasons for disqualification are understandable. Because the stakes are so high in war, the military is careful to ensure that those who volunteer to join the military can withstand the rigors of tough training and brutal combat.

For example, even a mention of asthma on someone’s medical records is often enough to disqualify them, since there is no guarantee that the appropriate medical treatment will be available on the battlefield.

Today, less than 29 percent of Americans between 17 and 24 years old are qualified to serve in the armed forces, and the number continues to drop. This is cause for concern, and the nation’s leadership should be working to reverse the trend.

Nevertheless, before the admission standards are changed with regard to transgender individuals, the Pentagon leadership must be certain that a change to policy would advance readiness and maintain maximal mental and physical resiliency among military personnel.

The media have already started to focus on the July 1 deadline set by Carter. Nevertheless, Mattis should take the necessary time to assess all the implications of this radical policy change.

Mattis is not bound by that deadline, nor should he enact the change unless he is absolutely convinced it will advance his highest priority—to increase, or at least not harm, military readiness.

Military leaders make a distinction between a calculated risk and a gamble. We’re advised to avoid gambles, especially with important decisions.

With the current level of understanding and facts available concerning Carter’s decision, allowing transgender individuals to join the military resembles more of a gamble.

There is plenty of time to conduct a full review, then make a fact-based decision on the issue. The stakes are too high to do otherwise.