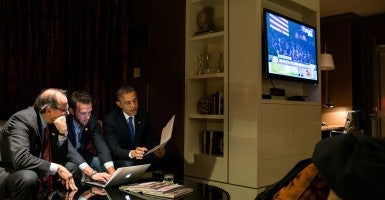 While President Obama waited for the concession call from Gov. Mitt Romney, the president worked on his acceptance speech with Jon Favreau, director of speechwriting, and campaign adviser David Axelrod at a Chicago hotel. (Photo: Pete Souza)

President Obama reached a new milestone, but not one he’s likely to tout. According to a Quinnipiac University poll, Obama ranks as the worst president since World War II.

When presented with a list of presidents since Harry S Truman and asked which they would consider “the worst,” 33 percent of respondents chose Obama. The president surpassed his predecessor, George W. Bush, by 5 points.

“Over the span of 69 years of American history and 12 presidencies, President Barack Obama finds himself with President George W. Bush at the bottom of the popularity barrel,” Tim Malloy, assistant director of the Quinnipiac University poll, said in a press release.

The poll reveals that Obama’s economic policies have driven voter dissatisfaction. Respondents identified the economy as the “most important problem” facing the nation, and an overwhelming 55 percent disapproved of Obama’s approach.

This economic disapproval has manifested itself in buyer’s remorse as 45 percent of voters say America would be better off had Romney won in 2012, as opposed to 38 percent who believe the nation is better off with Obama.

>>> Obama Should Have Listened to Romney on Russia