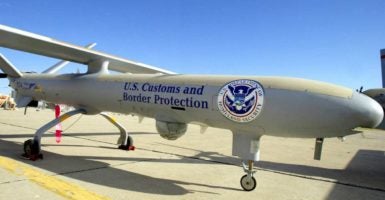 The U.S. Department of Homeland Security quietly shut down Operation Phalanx, an aerial surveillance program that intercepts drugs and illegal crossings along the Mexican border.

Cuellar, a member of the House Appropriations Committee and the homeland security subcommittee, is drafting a letter to DHS Secretary Jeh Johnson protesting the shutdown.

McCaul, who referred questions to the Homeland Security Committee, previously called on DHS to “develop a strategy to gain operational control” of the border.

“Over the last several years, Congress has provided billions of dollars to secure the borders, but without an end goal in mind,” McCaul said in a statement.

McCaul has authored legislation “to require the [DHS] secretary to gain situational awareness through the use of sophisticated technologies and other means, giving our border agents the ability to predict changes in illegal activity. “

DHS, which did not respond to Watchdog’s request for comment by deadline, asserts that illegal crossings have declined along the Texas-Mexico border.

But U.S. Border Patrol reports show that apprehensions in the Rio Grande Valley rose 27 percent in fiscal 2016 versus fiscal 2015.

In the smaller Laredo sector, Operation Phalanx accounted for 10,559 apprehensions and 4,007 “turnbacks” from March 2012 to December 2015. Phalanx was credited with seizing 12,851 pounds of narcotics during the period.

President Barack Obama established Operation Phalanx in July 2010 via executive order. The Army National Guard was authorized to provide up to 1,200 soldiers and airmen along the 1,933-mile southwest border to support U.S. Customs and Border Protection, a DHS agency.

In addition to Texas National Guard manpower and resources dedicated to Operation Phalanx, the Lone Star State has committed nearly $1.7 billion in taxpayer funds to border enforcement since 2005.

President-elect Donald Trump has vowed to appoint more robust leadership at DHS, so Operation Phalanx could be back in business by January.