6 Questions Obama Should Have Asked Castro 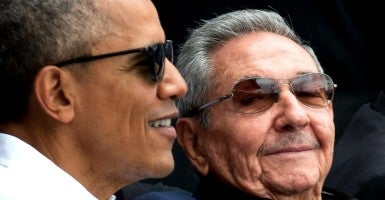 Any meaningful and enduring relationship between Cuba and America must be based on the truth. (Photo: Michael Reynolds /EPA/Newscom)

President Barack Obama is to be commended for raising the issues of civil liberties and free elections with Raúl Castro on his Cuban trip, saying, for example, that Cubans should be free to speak their minds and protest against their government without fear of “arbitrary detentions.” It must have been difficult for someone raised and educated by Progressives who have argued for nearly six decades that Cuba is a socialist “paradise.”

But Obama did not go far enough. Here are some of the other questions he should have asked Raúl Castro:

1. When will you allow free and open elections to be held in Cuba, as promised by your brother Fidel shortly after he took command of the country in 1959? How long will the Cuban people have to wait to exercise this basic right of a democracy?

2. When will you open your government’s archives to allow historians and others to document just how many Cubans have been executed at the order of your brother and other communist officials? The figure given in “The Black Book of Communism” is between 15,000 and 17,000. Is that too high or too low an estimate?

3. When will you release all political prisoners, especially the husbands, sons, fathers, and friends of the Ladies in White, who have provided you with the names of those who are in jail for speaking out for libertad? “The Black Book of Communism” estimates that 100,000 Cubans have been placed in prisons and forced labor camps for “political” reasons. Is that figure too high or too low?

4. When will you allow the free market to truly operate in Cuba so that the average worker will be able to earn a decent wage rather than the penurious $20 a month he presently receives? When will you allow credit cards—an essential instrument of modern commerce—to be used and accepted?

5. When will your brother Fidel admit that Che Guevara—admired by many young Americans—was not a high-minded revolutionary, but a cold-blooded murderer who functioned as Fidel’s personal executioner? Isn’t it true that he was a great admirer of China’s Cultural Revolution and that it was he, not Fidel, who invented Cuba’s first “corrective labor camp”—i.e., a gulag?

6. Isn’t it true that Cuba is not a socialist “paradise,” but a troubled third-world country ruled by a communist regime that discourages religion, denies freedom of the press and of speech, bars legitimate elections, treats the judiciary as a lapdog, and reveres the Communist Party above all things?

Any meaningful and enduring relationship between Cuba and America must be based on the truth. And the truth about what communism has done to the Cuban people for nearly sixty years has yet to be told.