What Obama Is Doing to Seal His Environmental Record 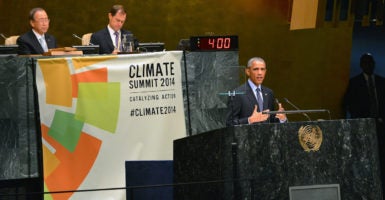 Before his last day in office, President Barack Obama wants to impose new fuel-efficiency standards and establish a green energy plan for North America to top off an environmental legacy including major international agreements and a massive expansion of regulations and subsidies.

“He will be leaving office with a very strongly negative legacy,” predicted Nick Loris, research fellow on energy and environment with The Heritage Foundation, in a phone interview. “After he failed to get a ‘cap and trade’ bill through Congress, he has used unelected bureaucrats to implement and pioneer regulatory onslaught.”

Early in his presidency, Obama and liberals in Congress unsuccessfully proposed financial incentives for companies to reduce carbon emissions, saying such a “cap and trade” approach would help curb global warming

During his weekend address Aug. 13, Obama spoke about “ambitious investments” that led to tripling the use of wind power, increasing the use of solar energy “thirtyfold,” and more energy-efficient vehicles.

“We’re not done yet. In the weeks and months ahead, we’ll release a second round of fuel-efficiency standards for heavy-duty vehicles,” Obama said of his Jan. 20 departure after eight years, adding:

We’ll take steps to meet the goal we set with Canada and Mexico to achieve 50 percent clean power across North America by 2025. And we’ll continue to protect our lands and waters so that our kids and grandkids can enjoy our most beautiful spaces for generations.

Three days after that address, the Environmental Protection Agency and the National Highway Traffic Safety Administration formally announced they are adopting new fuel-efficiency standards for heavy-duty vehicles such as tractor-trailers and buses.

This will mark the second time the Obama administration has put new fuel-efficiency standards in place. The White House, in a press release, asserts that 20 percent of carbon pollution comes from heavy-duty vehicles.

Separately, the Energy Department created a new program to spend $140 million on research and development for “fuel-efficient truck technologies.”

“Trucks, buses, and garbage trucks, these are all industries that measure their fuel to a tenth of a mile because energy efficiency is key to their bottom line,” Loris said. “There is little this would do to mitigate global warming. You could shut down the entire economy and the temperature would only move a few degrees Celsius.”

Obama’s other ambitious goal before leaving office was reached during the North American Leaders’ Summit in late June, where Obama met with Mexican President Enrique Peña Nieto and Canadian Prime Minister Justin Trudeau in Ottawa. The plan is to have the three countries operating on 50 percent clean energy by 2025.

Such a goal will be nearly impossible to reach in nine years, said Patrick Michaels, director of the Center for the Study of Science at the libertarian Cato Institute.

“Of course it’s not doable,” Michaels told The Daily Signal in a phone interview. “Even if you substitute nuclear power for fossil fuels, that wouldn’t be enough time to build enough nuclear plants.”

Sticking to the deal will be a challenge, agreed David Kreutzer, a senior research fellow for energy economics and climate change at The Heritage Foundation.

“Whatever the cost, it won’t be incurred by the Obama administration,” Kreutzer said in a phone interview. “He can take on the role of an energy reformer and his successor will have to deal with the lost jobs and high energy prices. The current government of Canada might seem inclined to sign on, but Mexico needs investment and might not want to tie itself into poverty.”

The regulatory costs of environmental regulations artificially raise energy prices, which are typically shouldered by lower-income Americans, according to an analysis by The Heritage Foundation.

A 2011 poll by the National Energy Assistance Directors Association found that 37 percent of low-income families sacrificed medical and dental coverage to pay for higher energy bills. The poll found almost one in five identified a family member who became sick because their home was too cold.

“It’s a legacy of unconscionable costs imposed with no climate impact,” Kreutzer said.

“It’s a legacy of unconscionable costs imposed with no climate impact,” @dwkreutzer says.

The president could have made a larger investment in cutting-edge technologies such as those associated with nuclear power, including fusion research, contends Tony Sadar, a certified consulting meteorologist and author of “In Global Warming We Trust: Too Big to Fail.”

“Progressives are looking at sunbeams and windmills,” Sadar told The Daily Signal in a phone interview. “You’re not really progressive if you’re looking at ancient technologies. Early on, the president supported research into nuclear power generation. But we’ve seen a return to the alternative energy that leaves much to be desired economically and even environmentally.”

‘He Is Doubling Down’

Michaels, of the Cato Institute, said much of the Obama legacy will be the “boondoggles” of solar and wind power along the countryside.

“His long-term legacy will be that he committed this country to sources of power that will never supply much dependable electric power,” Michaels said, adding:

The fact that solar and wind have been subsidized for years shows they are not successful. He makes no attempt to hide the fact that he believes Europe is doing so many wonderful things that we should. If he was consistent on that, he would observe that most of Europe is disengaging from these energy sources, while he is doubling down.

The Daily Signal sought comment from the Sierra Club and Greenpeace, both of which support much of Obama’s environmental agenda, but neither responded by publication time.

Courts have delivered a setback to some of Obama’s environmental agenda.

In February, the Supreme Court blocked EPA rules limiting carbon emissions from power plants. The high court ordered a stay, until more than two dozen lawsuits challenging the regulations can be sorted.

Lower federal courts halted the Interior Department from imposing stricter regulations on hydraulic fracturing, and separately stopped an EPA rule on small waterways and wetlands. The lawsuits and court rulings were based in part on executive overreach.

The United States entered an international climate agreement with 171 other countries negotiated in Paris that is intended to curb carbon emissions that government leaders say contribute to global warming. The governments hammered out the deal last year, and U.S. Secretary of State John Kerry signed the agreement in April.

Though treaties require Senate ratification, negotiators from the Obama administration and other countries worded much of the agreement to allow the measures to be handled by the executive branch.

The Obama administration has scaled back some taxpayer subsidies after spending hundreds of millions on loan guarantees for green energy companies that failed, Loris noted.

Solyndra, the politically connected solar panel company that went bankrupt despite a $500 million Energy Department loan, was the most publicized debacle. But dozens of other companies got taxpayer subsidies.

In congressional testimony, Loris noted the underlying themes of subsidies to green energy companies showed taxpayer money going to failed companies that couldn’t survive even with such help; projects backed by larger companies that should be able to operate without taxpayer help; and numerous other companies that benefit from taxpayer subsidies.

The government surprisingly seems to have learned something from the bad investments, Loris said.

“I haven’t seen new major loan guarantees, though there have been extended tax credits,” Loris told The Daily Signal. “There could be a recognition that government isn’t good at picking winners and losers. Folks will recognize that politicians shouldn’t invest in energy.”