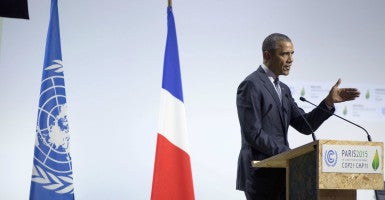 President Barack Obama bound the United States to an international agreement on climate change, but the administration’s decision to circumvent Congress to implement the deal has lawyers questioning its constitutionality.

Despite legally binding elements in the Paris Protocol, which require Senate ratification, negotiators worded the deal in a manner that enables Obama to handle it as an executive agreement and avoid congressional input.

“The president’s decision to treat the Paris agreement as an executive agreement instead of a treaty is just his latest use of executive power to achieve an end that he knows full well would not pass congressional muster,” Steven Groves, a lawyer who is an expert on treaties at The Heritage Foundation, testified Tuesday before a congressional committee.

Appearing at a hearing held by the House Committee on Science, Space, and Technology, Groves argued that the Obama administration knew that the Republican-led Congress would reject the climate plan.

Instead of risking failure, he testified, Obama chose to sidestep the constitutional requirement that a president secure approval from two-thirds of the Senate before he may subject the U.S. to a legally binding treaty.

Negotiators representing 195 United Nations member states met in Paris at the end of last year to finalize an international agreement aimed at cutting carbon emissions in hopes of slowing the potentially detrimental effects of climate change. Those effects, and their causes, continue to be hotly debated among scientists.

Although it isn’t legally binding, Obama also has pledged to pour $3 billion into the Green Climate Fund, a pot of international aid funded by developed countries to assist developing, poverty-stricken countries in reducing carbon emissions.

Groves testified that the White House’s decision to avert congressional input “flies in the face” of the climate change treaty brokered during the 1992 United Nations Framework Convention. The goal of that treaty was to stabilize greenhouse gas emissions within a set time frame.

Groves argued that President George H.W. Bush agreed with the Senate, then led by Democrats, that the chamber would ratify the 1992 treaty with the requirement that any future agreement containing targets and timetables be submitted to the Senate.

Proponents of the Paris Protocol, including Andrew Steer, president and CEO of the World Resources Institute, contend that the deal is a “hybrid” agreement. They say it includes both legally binding conditions and voluntary pledges, and so does not require Senate ratification.

“Having looked at this very carefully with our legal scholars, our scientists, and our economists, our view is that the agreement strikes the right balance between legally binding and nonbinding, given where we are as a global civilization,” Steer testified to the committee.

The Obama administration intends to implement the agreement domestically through regulations written by the Environmental Protection Agency, including those created under the agency’s controversial Clean Power Plan.

“It’s a clever thing that the White House did—you go and you make an international commitment in Paris, you bypass Congress completely, and then you go to enforce it domestically through EPA regulations,” Groves said. “There’s a lack of democratic legitimacy on almost every level of the creation of this document and its enforcement.”

Groves, the Lomas senior research fellow in Heritage’s Margaret Thatcher Center for Freedom, predicted that the EPA regulations will be litigated among cities and corporations.

“If you want a durable climate change agreement, you have to involve Congress. This administration has chosen not to do that,” Stephen Eule, vice president for climate and technology at the U.S. Chamber of Commerce, testified during the hearing.

“So, the question is, is this a durable and legal agreement? I would say no.”