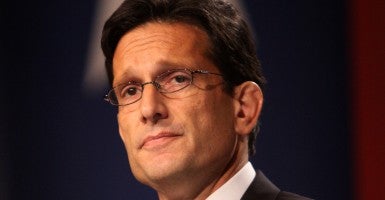 The defeat of Majority Leader Eric Cantor, the House’s No. 2 Republican, has major ramifications for policy and leadership in Washington.

Brat credited the tea party and grassroots activists for his victory. Many conservatives see the results as a devastating blow to establishment Republicans, whom they count Cantor among.

[email protected]’s defeat has major ramifications for policy and leadership in Washington.

Cantor announced today that he will step down from the post of majority leader effective July 31, but will continue to represent his district until his term ends in January.

According to veteran observers of the House who spoke to The Daily Signal on background, here are four potential implications of Cantor’s loss:

Cantor’s stance on immigration reform was the focal point of Brat’s campaign. While some conservatives are dead set against “comprehensive” immigration reform because they don’t trust President Obama, Cantor publicly supported a piecemeal approach to fixing the immigration system that included securing the border and offering temporary work visas.

The Senate passed the Gang of 8’s “comprehensive” bill last year, but House leadership has declined to bring a companion bill to the floor, saying it would grant amnesty to millions of illegal immigrants. However, House Speaker John Boehner, R-Ohio, Cantor, and other House leaders—including Majority Whip Kevin McCarthy, R-Calif., and House Conference Chairwoman Cathy McMorris-Rodgers, R-Wash.—have said they’re ready to get to work on some reforms.

If Cantor decided to push for amnesty-centered immigration reform in his last few weeks in leadership, one source familiar with House procedures said he would do so without the “moral authority” to lead Republicans.

With expiration of the Export-Import Bank’s charter looming, House conservatives have been adamant in opposing its reauthorization.

The 80-year-old agency and its corporate supporters are asking Congress to renew its charter, but Republicans such as Financial Services Chairman Jeb Hensarling, R-Texas, argue the bank furthers cronyism by making taxpayer-backed loans to foreign companies to buy U.S. products.

Cantor, distrusted by some conservatives for what they see as stronger ties to Wall Street than Main Street, brokered the deal that reauthorized the Export-Import Bank’s charter in 2012. As the debate flared this year, however, Cantor had opted to remain quiet before the primary election.

Bank supporters, though, were counting on Cantor to push Republicans to back reauthorization of the bank, Politico reported. Stock in aerospace giant Boeing, long the biggest beneficiary of Ex-Im loans, took a beating yesterday on news of Cantor’s defeat,  The Washington Examiner’s Timothy  Carney reported.

Although the House speaker is elected by a roll call vote of the lower chamber, the majority conference—in this case, Republicans—conducts a secret ballot to elect a majority leader. That vote is set for June 19.

Hensarling today announced plans to explore a leadership run, and both McCarthy and Rep. Pete Sessions, R-Texas, chairman of the Rules Committee, confirmed intents to run.

“This is going to roil the waters because it’s so unexpected,” a long-time observer of the House said. “Nobody was ready for this.”

The House is gearing up for hearings delving further into the Veterans Affairs and Benghazi scandals, and continues to examine the Taliban prisoner swap for Army Sgt. Bowe Bergdahl.

Cantor’s loss, followed by the race to fill his leadership seat, likely will overshadow these investigations, at least for the near future, knowledgeable onlookers say.

“There’s good and bad,” the House observer said. “Maybe it stops immigration [reform] and Export-Import. But it’s bad because the narrative is going to be taken up by internal Republican politics and taken off the Obama administration’s failings.”