How the New Benghazi Committee Can Drive the Investigation Forward 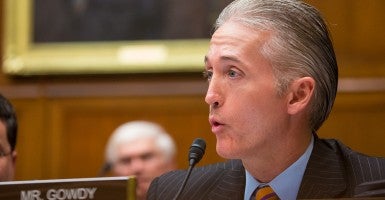 The new House special committee to investigate the Benghazi terrorist attacks wields broad legal authority to do its job. The panel can access classified documents not available to the press or public and to subpoena witnesses—with consequences for those who refuse to talk.

Hans von Spakovsky, a Heritage Foundation legal expert who formerly worked for the Justice Department, says the investigation likely will be the most thorough yet into the murky details surrounding the Sept. 11, 2012, attacks in Benghazi, Libya, that left four Americans dead.

Speaking yesterday at a Heritage event devoted to the topic, von Spakovsky said the bipartisan committee led by Rep. Trey Gowdy, R-S.C., will possess the required expertise and support. Gowdy is a former prosecutor.

“The select committee has the power, resources, and staff to get to the bottom of this,” von Spakovsky said.

He said the panel ought to be able to effectively dig into the circumstances of the attacks on the U.S. diplomatic outpost and a nearby facility—including the State Department’s handling of the incident.

The resolution confirming creation of the committee of seven Republicans and five Democrats highlights nine specific topics. Among them are policies and decisions leading up to the events in Benghazi, and the executive branch response in the aftermath.

House Speaker John Boehner’s decision to launch the special committee came after the court-ordered release of emails to Judicial Watch, a conservative watchdog group. Some showed that President Obama’s communications team initially tried to blame the attacks on an anti-Muslim video on YouTube—rather than failures of policy or intelligence.

Previously, those documents had not been provided to a Republican-led House oversight committee that subpoenaed all Benghazi-related documents.

An independent Accountability Review Board report, issued by the State Department under then-Secretary of State Hillary Clinton, offered 24 recommendations for how similar attacks could be prevented.

In January, the bipartisan U.S. Senate Select Committee on Intelligence released a review faulting the State Department for refusing security measures it said could have prevented the deaths of Ambassador Christopher Stevens and three other Americans.

That Senate report also noted that the terrorists behind the attacks had not been brought to justice, though “some of the individuals have been identified with a strong level of confidence.”

Initiation of the House select committee represents a perceived lack of progress since the Senate panel issued its report.

The panel’s investigation will be the eighth congressional probe of Benghazi, signifying to some observers the urgency for truth.

“We should not only be in the business of placing justice, but also deterring threats to U.S interests,” said Peter Brookes, a senior fellow for national security affairs at Heritage. “It’s a very difficult environment in terms of terrorism right now. There are some who believe Islamic terrorists can’t be deterred. I believe they can.”

The U.S. Constitution provides that Congress can obtain executive branch documents, so provisions of the Freedom of Information Act do not apply to the committee.

President Obama holds the authority to assert executive privilege over documents his administration wishes to withhold. However, von Spakovsky said,  such a move would be unlikely to stand in court.

“If the administration wants to prevent specific documents or testimony, it will have to come up with great reasons to do that,” von Spakovsky said.

If an executive privilege case does reach court, the House can ask for a “privilege log,” which describes in detail what the documents in question are about.

A judge would determine if the documents are indeed privileged.

There’s precedent for the exercise of executive privilege under the Obama administration. In 2012, the Department of Justice refused to turn over 1,300 pages of documents to a House committee related to the agency’s Fast and Furious gun trafficking scandal.

The committee’s resolution contains similar protections against noncompliance by witnesses, von Spakovsky said. Any subpoenaed witness who refuses to comply may be punished with a fine up to $1,000 and up to a year in jail, he said.

Such a case of would go before Ronald Machen, U.S. attorney for the District of Columbia, who would decide whether to bring the situation before a grand jury.

Former administration officials have more limited protection, von Spakovsky said. “From a legal standpoint, it’s much easier to subpoena a former government official than a current one,” he said.

Committee members have other built-in advantages:

“That [private meetings] is the most effective way for the committee to do the job,” von Spakovsky said. “Good lawyers subpoena the witnesses they need and hold closed-door, intense depositions of those witnesses. You start with the people on the ground in Libya and work to the State Department and the Pentagon.”