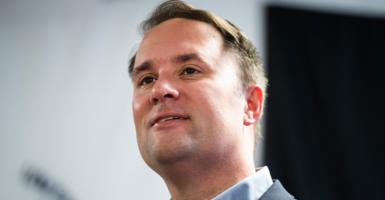 "Racism and race-based government decision-making in any form is wrong and unlawful," Virginia Attorney General Jason Miyares, pictured at a Nov. 4 event in Virginia Beach, says in announcing an investigation of policies in one of the state's richest school districts. (Photo: Tom Williams/Getty Images)

Virginia Attorney General Jason Miyares announced Wednesday that prosecutors will investigate one of the state’s richest school districts and its celebrated science and tech school for “unlawful discrimination” in violation of state law.

The high school claims the honors were delayed as a result of human error.

In announcing that his Office of Civil Rights would conduct the probe, Miyares said:

No student should be treated differently because of their race. Students at Thomas Jefferson High School for Science and Technology are amongst the brightest in the nation, yet some have been punished in the name of ‘equity.’ Racism and race-based government decision-making in any form is wrong and unlawful under Virginia’s Human Rights Act.

A federal judge ruled almost a year ago that Fairfax County’s school admission practices discriminated against Asian students by limiting their number in an effort to “racially balance” the student body at TJ, the top-rated STEM school in the country.

Asian student enrollment at TJ declined from 73% to 54% before the judge ruled against the Fairfax school system last February, finding that the school’s “racial balancing” practice is unlawful and discriminatory.

Regarding the discrimination against Asian students, Miyares said:

The controversial admissions policies at [TJ], which have significantly decreased the amount of Asian American students enrolled in recent years, is another example of students being treated differently because of their ethnicity.  My Office of Civil Rights will investigate any potential violations of the law and vindicate the civil rights of these students and their families.

Following a Fairfax County School Board resolution to provide “Equal outcomes for every student, without exceptions,” TJ administrators decided to delay informing students of their National Merit Scholarship awards so as to focus on “students for who they are as individuals, not focus on their achievements,” Brandon Kosatka, the school’s director of student services, said.

The school has reportedly withheld student award recognition for years, affecting over 1,200 students and often keeping them from being able to list honors achievements on university and scholarship applications.

“I am grateful, and hopeful that the attorney general is looking into this matter,” Harry Jackson, former president of the Thomas Jefferson High School Parent Teacher Student Association, told The Daily Signal.

“We, the parents, have been sounding the alarm on the ‘dark’ side of equity, as envisioned by activist educators that can cause actual harm to our students,” Jackson said. “We hope that [Miyares] will put an end to the current discrimination at TJ, and allow our children to thrive.”

Although admitting to Jefferson High’s direct implementation of an “equitable” policy of keeping students from being recognized for their achievements, a written statement from the school attempts to paint the decision to withhold awards as a “unique situation due to human error.”

Youngkin and Miyares won their elections in November 2021 along with Lt. Gov. Winsome Earle-Sears, and all three took office in January 2022. Youngkin is white, Sears is black, and Miyares is Hispanic.

Youngkin supercharged his gubernatorial campaign after committing to education reform in Virginia—specifically criticizing policies that are anti-parent, racially discriminatory, and counter to school choice. He promised to fight for students and their parents.

This investigation provides the latest evidence that Youngkin and Miyares are attempting to deliver on those promises.