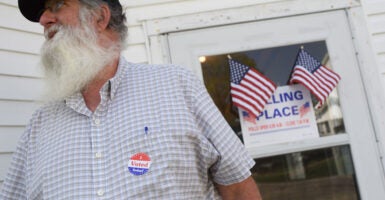 An election reform bill in West Virginia will help make some much-needed updates to the state’s voting system. But leftists’ oppose the bill for reasons that are out of touch with reality. Pictured: A West Virginian leaves the polls on May 8, 2018. (Photo: Jeff Swensen/Getty Images)

The Judiciary Committee of the West Virginia House of Representatives held a virtual hearing on an election reform bill on April 5. What took place was like a story from the parody site The Babylon Bee.

I was invited to testify in support of the bill by some West Virginians, so I made a serious, but very short presentation on why this is a good bill that makes needed changes to West Virginia’s election laws.

While waiting to testify, I had to listen to a whole line of liberals who were speaking out against the legislation. If it had not been such a serious topic, I would have been laughing at the ridiculous claims and assertions made about the bill.

To steal a line from the classic movie “Casablanca,” twice the usual number of liberal suspects had lined up, including the American Civil Liberties Union and the West Virginia Citizen Action Group, an organization started by a former employee of Ralph Nader. Their risible complaints were all basically the same: that the election reform bill restricts voting rights and is intended to suppress minority voters.

So what is in this bill that is supposedly so repressive and restrictive?

Several years ago, West Virginia implemented automatic voter registration to register anyone who comes into the Department of Motor Vehicles to apply for a driver’s license. The election reform bill simply clarifies that an applicant will be automatically registered unless she “affirmatively declines” to be registered.

But in the liberal fantasy world that equates any election reform with “Jim Crow,” asking someone if they want to register to vote—giving them an option—rather than just registering them without their permission or knowledge, is considered “voter suppression.”

That is such an absurd concept that I had a hard time believing what I was hearing from witness after witness. Apparently, the idea that Americans should have a choice and the freedom to make their own decision on whether to opt-in to being registered is an outmoded concept akin to the worst excesses of the segregationists of the pre-civil rights era.

What else is in the bill that is so objectionable? A provision that requires state courts to notify election officials when individuals called for jury duty are excused because they are not U.S. citizens or have moved out of the state.

In the liberal lexicon, removing ineligible voters—including aliens who have violated the law by registering to vote in the first place—is also voter suppression. I think the average citizen in West Virginia doesn’t think there is anything wrong with “suppressing” the illegal votes of noncitizens or residents of other states.

The bill does make a change in early voting to which witnesses assigned nefarious motives. It would end West Virginia’s early voting period six days before Election Day instead of the current two days. But relevant to the false claim that this would restrict the ability of residents to vote, the actual number of days of early voting remains exactly the same.

This change has nothing to do with restricting voting. Instead, as Patti Hamilton of the West Virginia County Clerks Association explained to MetroNews, it would give election officials the extra time they need to prepare for Election Day, when the majority of West Virginians vote.

Mercer County election official Verlin Moye made the same point, saying that the change “gives us badly needed time that we need to prepare for the election.”

On the automatic voter registration change, Moye added that election officials prefer that residents opt in to register because it should “be a conscious decision” by an individual. The liberals at the hearing obviously think it should be an unconscious decision.

The bill also changes the deadline for a voter to request an absentee ballot from six days before Election Day to 11 days. The left-wing witnesses didn’t like that either. But again, that change has nothing to do with rolling back voting rights.

On May 29, 2020, the U.S. Postal Service sent a letter to state officials all over the country urging them to change their absentee ballot deadlines to comply with Postal Service delivery times.

The letter stated that most “domestic First-Class Mail is delivered in 2-5 days” although the Postal Service “cannot guarantee specific delivery dates or alter standards to comport with individual state election laws.”

It recommended that election officials allow at least a week for the delivery of absentee ballots to voters who have requested them and that voters also “mail their ballots at least 1 week prior to the due date” in the state.

In other words, it can take at least 14 days for a voter to receive an absentee ballot he has requested and to mail the completed ballot back to election officials.

By allowing voters to request absentee ballots only six days prior to Election Day, West Virginia was increasing the risk that voters will be disenfranchised because the absentee ballot they mail back might arrive too late.

The deadline in West Virginia for election officials to receive a completed absentee ballot is five days after Election Day as long as the ballot envelope is postmarked by Election Day. But that is 11 days, less than the minimum 14 days recommended by the Postal Service.

By changing the deadline for a voter to request an absentee ballot to 11 days before Election Day, West Virginia is accommodating the Postal Service’s delivery times and ensuring that fewer voters will have their absentee ballots rejected for being late.

Contrary to the objections being raised, this change will actually help prevent voters from being disenfranchised.

These are among just some of the reforms in the bill. None of them can be accurately categorized as limiting the ability of West Virginians to vote, notwithstanding the frenzied claims to the contrary by the witnesses who appeared as themselves and not characters in a “Saturday Night Live” skit.

For West Virginia, this election reform bill is a good start on fixing some of the vulnerabilities in its election process.