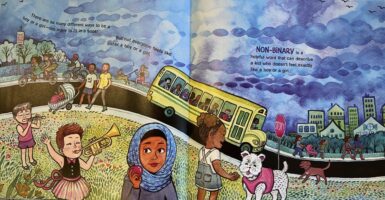 A passage from the book “It Feels Good to Be Yourself,” written by Theresa Thorn and illustrated by Noah Grigni. (Photos: Ian Prior for The Daily Signal)

Written by “One Bad Mother” podcaster Theresa Thorn, the book “It Feels So Good to Be Yourself” describes the terms “sex assigned at birth,” “intersex,” “gender identity,” “gender expression,” “cisgender,” “transgender,” and “non-binary” to readers.

An Amazon description of the book says it is intended for children ages 4 to 8.

“It is my wish that this book helps children to better understand themselves and others,” writes Thorn in an author’s note. “This book is for trans kids, cis kids, non-binary kids, gender-fluid kids, gender-expansive kids, questioning kids, and all kids, everywhere.”

The book’s royalties go to the LGBTQ organization Gender Spectrum, according to Thorn’s husband, and it cites multiple radically liberal organizations as “helpful resources” for young readers, including the Human Rights Campaign, the Trans Youth Equality Foundation, and GLAAD, originally the Gay & Lesbian Alliance Against Defamation.

Wayde Byard, public information officer for Loudoun County Public Schools, confirmed Wednesday to The Daily Signal that the school system has four copies of “It Feels So Good to Be Yourself”  in elementary school libraries.

The book is an “optional reading selection,” Byard said.

Loudoun is about 45 miles west of Washington and  is one of the nation’s most affluent jurisdictions and the fourth most populous county in Virginia. The county’s school system has drawn national attention because of  its radically progressive policies as well as student assaults on school premises that officials covered up.

Ian Prior, executive director of Fight for Schools, an organization fighting radical content in schools, slammed the public school system in a statement to The Daily Signal.

“This book is not about treating people with kindness, it is about encouraging young children to question their gender before they are able to read proficiently, multiply and divide, and know the state capitals,” said Prior.

“Further, this book, and others like it, promotes an ideology that many parents would find objectionable to be pushing on their children in public schools, especially on children that are so young.”

Prior pointed out that parents may purchase the book for their children if they wish.

“But funding them with taxpayer dollars and making them available for any child to unsuspectingly pick up off the shelf is yet another example of Loudoun County Public Schools inserting itself between parents and their children on issues best dealt with at home,” he said.

“This is Ruthie,” the book begins. “She is a transgender girl. That means when she was born, everyone thought she was a boy. Until she grew a little older—old enough to tell everyone that she’s actually a girl. Girl is Ruthie’s gender identity.”

“This is Ruthie’s brother, Xavier,” the book continues. “Xavier is a cisgender boy. That means when Xavier was born, everyone thought he was a boy, and as he grew older, it turned out everyone was right—he is a boy. Boy is Xavier’s gender identity.”

Thorn has said publicly that she is the mother of a transgender child, and Thorn’s husband, Jesse, described on social media how they plan to begin medically transitioning their 9-year-old this year.

“If you’re not sure what I mean when I say my child is transgender, allow me to explain,” wrote Theresa Thorn in 2019. “My firstborn baby was assigned male at birth but socially transitioned to female at age 5.”

“It Feels So Good to Be Yourself” is illustrated by transgender activist and tattoo artist Noah Grigni, who was influenced by “queer futurism, magical realism, dreams, and the subconscious.”

“I was 14 when I came out as trans, and I’m lucky to have parents who listened and stood up for me when others failed to,” Grigni writes in an illustrator’s note for the book.

“We need more books with trans protagonists,” the illustrator continues. “The trans population is as diverse as the human population, and no number of books could hold all our stories. Dear reader, it’s up to you to continue this work, rewrite these definitions, share your stories, and build a future more expansive than we can imagine.”

‘Non-Binary Is a Helpful Word’

Thorn writes that there are “so many different ways to be a boy or a girl—too many to fit in a book.”

“But not everyone feels like either a boy or a girl,” the author writes. “Non-binary is a helpful word that can describe a kid who doesn’t feel exactly like a boy or a girl.”

Thorn then describes “Alex,” a child who is “both a boy and a girl,” writing: “When Alex was born, everyone thought Alex was a girl, but Alex is both boy and girl. This is Alex’s gender identity.”

Next, the author describes “JJ,” a child in a wheelchair.

“JJ is neither a boy nor a girl,” writes Thorn. “Ever since JJ was very little, they never felt exactly like a boy or a girl—they just felt like themself. This is JJ’s gender identity.”

The author tells readers that it does not matter whether they feel like a boy or a girl, both, or neither.

“See, when you were born, you couldn’t tell people who you were or how you felt,” the book continues, alongside an illustration of a newborn baby.

“They looked at you and made a guess,” the book continues. “Maybe they got it right, maybe they got it wrong. What a baby’s body looks like when they’re born can be a clue to what the baby’s gender will be, but not always. When people guess wrong, it’s okay to let them know. Ruthie was 5 when she told her parents. Oops! Ruthie was a girl all along—they just didn’t know it at first.”

Thorn urges readers to listen to their hearts and to know that “you are okay exactly the way you are. And you are loved.”

“It feels good to be YOURSELF, doesn’t it?” the book concludes.