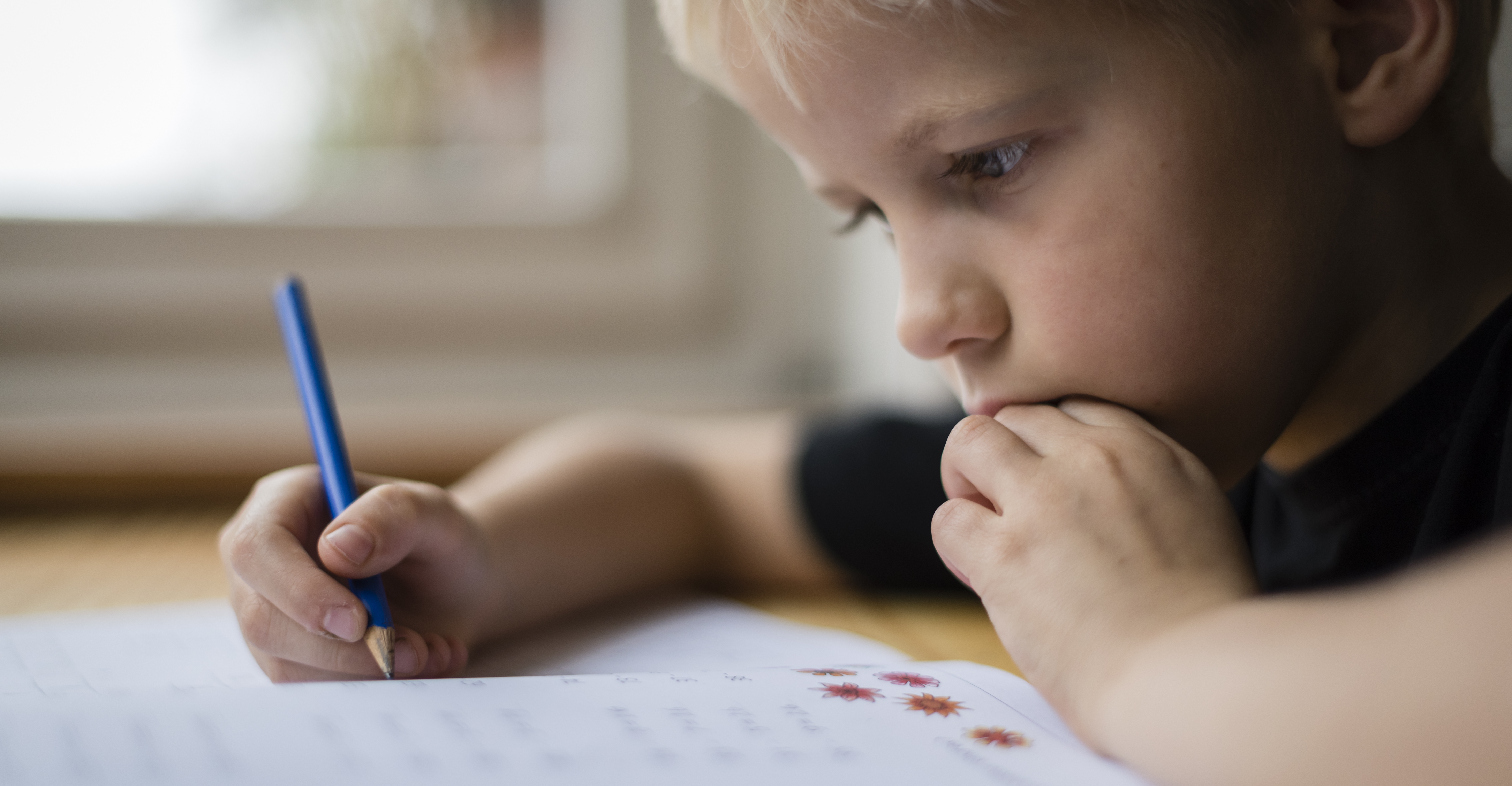 A 9-year-old sits pondering his math homework. In Northern Virginia, private religious schools are reporting upticks in enrollment since the coronavirus pandemic hit and more recently as a result of controversies in the public schools. (Photo: ETham Photo/The Image Bank/Getty Images)

“This year alone, I can point to at least four families … who have either relocated to the area from other states or who have moved from very progressive public school districts closer to D.C. who have sought an education like ours,” John DeJak, the headmaster of Chelsea Academy, a private, Catholic school in Front Royal, Virginia, told The Daily Signal.

A spokeswoman for Fairfax County Public Schools attributed nationwide decreases in public school enrollment “to the pandemic and the disruption it caused to public schooling.”

“Public school enrollment has declined across the nation since the beginning of the pandemic. FCPS is no different in that regard,” Fairfax County Public Schools spokeswoman Julie Moult told The Daily Signal.

But commentators, activists, and leaders of Northern Virginia private schools warn that decreases in enrollment are due not only to restrictive COVID-19 policies, but also to the increasingly radical curriculum content implemented in public schools systems, such as in Virginia’s Fairfax and Loudoun counties.

That content includes explicit sex and gender identity education, as well as critical race theory, which holds that America is fundamentally racist and teaches students to view all social interactions and people through the lens of race.

“Parents are taking their kids out of Loudoun County Public Schools because of their disastrous handling of COVID, their failure to keep kids safe, divisive materials in the classroom and library, and the unwillingness of the School Board and superintendent to listen to anyone but a small, woke brigade of activists that have our schools under their thumb,” Fight for Schools Executive Director Ian Prior told The Daily Signal.

“It’s unfortunate,” he added, “because there are some excellent teachers at LCPS who truly do care about their students, but until this school system rights itself, parents will continue to opt for private school and homeschooling.”

Where Are Students Going?

Leaders at a number of private schools in Northern Virginia described both increasing admissions and applications in their schools, attributing this growth to their dedication to classical and religious education.

Calvary Road Christian School Administrator Kevin Lewis suggested to The Daily Signal that parents are departing public schools because they have “lost faith in the decisions school boards made” when public schools repeatedly closed schools over the past few years.

“Parents don’t want the schools to address topics that should be left to parents, such as sexuality,” added Lewis, whose private, Christian school is based in Alexandria.

The school’s administrator also suggested that parents want an environment that more closely aligns with their values and a “morally safe place, where standards of behavior” and academics are higher.

Calvary Road Christian School has seen a 35% increase in student enrollment since the pre-pandemic 2019-20 school year, Lewis said. During the 2019-2020 school year, he told The Daily Signal, 219 students were enrolled at the school. It currently has 296 students enrolled for the 2021-2022 school year.

Fairfax Christian School CEO and President Jo Thoburn told The Daily Signal that the school moved to a new campus and was in the process of growing its student body when the pandemic hit.

“We have had an increase in enrollment, but have had to cap the building at 75% occupancy to maintain a 6-foot social distance between students,” she explained, adding that “most new families have lost confidence in the government schools.”

The Manassas, Virginia-based Holy Family Academy has seen an uptick in enrollment from families transferring from the local parish school “because they are in masks all day,” headmaster Mo Woltering told The Daily Signal.

But Woltering said that Holy Family, an independent Catholic school where students daily attend Mass and pray the rosary, does not typically accept transfer students from public schools as that would be “too much of a culture difference.”

At Saint Ann Catholic School in Arlington, Virginia, the principal said 26 of the school’s newly enrolled students are from Arlington County and Fairfax County public schools.

“Catholic Schools believe that parents are the primary educators of their children,” Saint Ann Catholic School Principal Anthony Sahadi told The Daily Signal. “Because of this, we model and teach traditional values that support families, parents, students, teachers, and education.”

Sahadi said that the Arlington school has added 66 new families and received 300 new applicants for student admission since last year, numbers he described as “huge gains” for the school.

“Our COVID policy is manageable, and was written collaboratively with our families, administration, and teachers,” the principal said, noting that families can “sense and appreciate” the Catholic school’s “focus on God, traditional values, diversity, and academic rigor indicated by processes and growth.”

Farther out in Virginia toward the Shenandoah Mountains, Chelsea Academy headmaster DeJak said the school has seen increasing applications and enrollment over the past two years, specifically from former public school students.

DeJak suggested to The Daily Signal that parents are seeking schools that embody their values and offer their children a thorough education. Some Chelsea parents opt to drive from “over an hour away to get their children to school at Chelsea,” he added.

As recently as our open house, this past Sunday, we have seen parents who are currently in the Beltway who are looking to move west and see Chelsea as a place that embodies their values and the type of education that they want for their children.

This year alone, I can point to at least four families—with multiple children from each—who have either relocated to the area from other states, or who have moved from very progressive public school districts closer to D.C. who have sought an education like ours and who—upon our initial meeting—have expressed relief and enthusiasm for a Catholic liberal arts education and supportive community that we offer.

Many families have also told him that they are now homeschooling their youngsters until they are old enough to go to Chelsea, which currently offers grades 4 through 12, prompting Chelsea to add K-3 grades next year, the headmaster said.

Many other families are also turning to homeschooling.

Seton Home Study School sits just down the road from Chelsea in Front Royal, offering what it calls a “Christ-centered, academically strong program designed for the Catholic homeschooling family in today’s world.”

Director of Admissions Draper Warren said the homeschooling organization’s enrollment stood at about 12,000 students before the pandemic, but for the 2020-2021 school year, that number had “skyrocketed to 20,000 students.”

“With most schools offering in-person instruction again, many students did return to physical schools, but we have retained far more students than expected for this 2021-2022 school year,” Warren told The Daily Signal. “Our current enrollment is over 17,000.”

A main reason that families enroll with Seton is because of the organization’s Catholic identity, Warren said, noting that the Catholic faith is “infused in all aspects of our curriculum.”

“Many public schools have had an undertone of hostility toward Christian faith and conservative values, so it shouldn’t be surprising when families who hold those values decide to go elsewhere,” he added.

“I heard from many families in 2020 that they had been thinking of homeschooling for years and the pandemic is what finally forced them to try it out,” the Seton Home Study School director of admissions said. “Now that they have had an experience of homeschooling with a conservative Catholic curriculum, they finally know what they had been missing before, and many decided not to go back to public schools.”

How Bad Are Public Schools?

“The examples of public schools promoting racially discriminatory ideas have become too numerous to count—often using the words ‘critical race theory’ in lessons or teacher-training programs,” The Heritage Foundation’s Jonathan Butcher, a fellow in education, told The Daily Signal. “No student should be compelled to believe the idea that individuals from one race deserve certain sanctions or benefits because of the color of their skin.”

“Parents everywhere should have the option to choose how and where their children learn,” Butcher said. “The radical, race-obsessed curriculum so prevalent in public schools today is another reason parents should be allowed to find a more well-rounded, historically accurate course material.”

Two sexual-assault cases that the school board badly mishandled and covered up have torn apart the Loudoun County Public Schools system, which previously had been criticized for its transgender bathroom proposal (which passed in August) and its equity plan promising “a racially conscious, identity-affirming and culturally responsive learning space for every student and employee.”

In Fairfax County, The Daily Signal reported last week that the school system will administer a survey in November asking children as young as 13 years old to anonymously answer questions about their sex lives, drug use and alcohol consumption, and intimate details of their family life.

The same school system came under fire a few weeks ago when parents discovered that two graphic and explicit books were available in school libraries: “Gender Queer” by Maia Kobabe and “Lawn Boy” by Jonathan Evison.