Leftist Judges Declare Bees Are Fish to Get Them Endangered Status 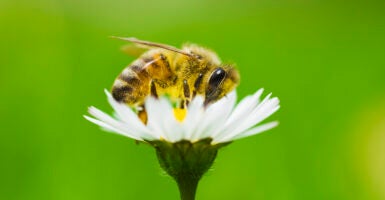 California’s endangered species act didn’t protect insects—until environmental activists got left-wing judges to declare that bumble bees are fish so they would be covered by the law. (Photo: Jason Hosking, The Image Bank/Getty Images)

Louis Pham is a member of the Young Leaders Program at The Heritage Foundation.

God said, “Let there be light,” and there was light. Not to be outdone, three liberal judges in California said, “Let bees be fish,” and they were fish (for all relevant legal purposes, at least).

What a remarkable superpower liberal judges have to redefine reality with a word or two!

How did they do it?

California has an endangered species act that allows the government to give special protections to native species of “bird, mammal, fish, amphibian, reptile, or plant.” The state Legislature once considered adding insects to that list but decided not to.

Many decades later, environmental activist groups decided that the law should apply to several species of bumble bees. Rather than convince the Legislature to add insects to the list, they decided that the quickest route to get what they wanted would be to have judges declare that bumble bees are, actually, fish.

And, dutifully, the judges did.

The opinion is a magnificent example of how creative judges twist language and legislative history in knots to avoid the plain meaning of a law.

The statutory definition of fish includes the full panoply of marine life, including crabs, clams, sponges, starfish, and even amphibians. And it identifies these creatures in terms of broad categories: “wild fish, mollusk, crustacean, invertebrate, amphibian, or part, spawn, or ovum of any of those animals.”

The judges wanted to reach this outcome as a matter of policy, and they weren’t going to let things like law or democracy stand in their way.

This case might seem silly, but the decision matters. Contrary to what Supreme Court Justice Anthony Kennedy once wrote, none of us are masters of the universe, free “to define [our own] concept of existence.”

Judges have even less power to do that than the rest of us. Their job is to interpret the laws as written. It is the people and their elected representatives who create the law and give it meaning. A judge may ascertain its meaning, but he may not give the words his own.

If he does, he deprives the law of the legitimacy that democracy gives it.

The Constitution does not give the power to make laws to one person, but to legislative bodies composed of elected representatives. The Founders designed our government in this way to bring power closer to the people. Our legislators are voted on by us, and we have the power to hold them accountable for what they do.

We have much less power, sometimes none at all, to hold judges accountable, and that makes judges unsuited to hold legislative power. Each time a judge strays from the meaning that the people gave to a law, the judge becomes, in essence, an illegitimate, one-man legislature.

By illegitimately rewriting laws under the guise of “interpreting” them, a judge also damages the rule of law. “[I]n America the law is king,” wrote Thomas Paine. But if law is subject to the whims and fancies of judges, then they are the kings. And the law is then neither supreme nor stable nor democratic.

That is why it matters when judges decide bees are fish, because they lack all authority—metaphysically and constitutionally—to declare it so.