Texas Bathroom Bill Intended to Be ‘Model for Other States’ 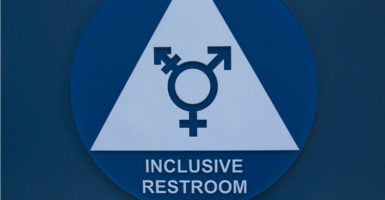 The Texas Privacy Act seeks to ensure that men will not be allowed to enter women’s restrooms. (Photo: David Bro/ZUMA Press/Newscom)

The Texas Legislature will be voting next week on a bill that will prevent men from entering women’s restrooms and the lieutenant governor of Texas says his state’s legislation is a model for the nation.

“I think that our legislation can be a model for other states to follow and end this discussion once and for all about men being able to walk into ladies’ rooms in public buildings and to stop school districts from allowing boys and girls to shower together,” Texas Lt. Gov. Dan Patrick, a Republican, told The Daily Signal in a phone interview Wednesday.

If passed into law, the Texas Privacy Act will ensure that men and women use separate bathrooms.

Texas state Sen. Lois Kolkhorst, R-Brenham, the author of the bill, said there is currently no law on the books in Texas that prevents a man from entering a woman’s restroom dressed looking like a man.

The Texas Legislature held a hearing for the bill on Tuesday.

After nearly 20 hours of public testimony by over 400 witnesses, Patrick said the Texas state Senate Committee on State Affairs voted 8-1 to send the bill to the full Texas Senate for a vote.

The bill is nondiscriminatory, Patrick said, because it encourages schools and government buildings and businesses to provide special facilities for those who want an exception.

“It does not discriminate but it is focused on public safety and common decency and privacy,” Patrick said.

Sarah Kate Ellis, the president and CEO of the Gay & Lesbian Alliance Against Defamation (GLAAD), released a statement in February in opposition of the bill.

It was published with a letter that included over 140 signatures of entertainers and musicians decrying the Texas Privacy Act and other “anti-LGBTQ bills.”

“The public outcry by musicians and influencers against upcoming anti-LGBTQ bills in Texas should have lawmakers taking note,” Ellis said. “By adding their voices to the chorus of fair-minded people calling for equality, these artists are using their platforms to speak out and send the resounding message that discrimination is not an American value.”

The American Civil Liberties Union released an ad protesting the legislation which tells viewers they can “stop the bill.”

“You’ve gotta roll up your sleeves, pull down your pants, and pee with LGBT … this isn’t a privacy issue,” the ad states.

Dana Hodges, state director for Concerned Women for America of Texas, a conservative women’s advocacy organization, said the bill is about safeguarding privacy and dignity.

“This bill protects the privacy, safety, and dignity of women and girls in public facilities,” Hodges said in a statement provided to The Daily Signal. “It also allows private industries to make their own restroom policy. This is an issue I’m passionate about having been personally violated in a women’s restroom.”

Patrick said he expects a full vote in the Texas state Senate next Tuesday or Wednesday.