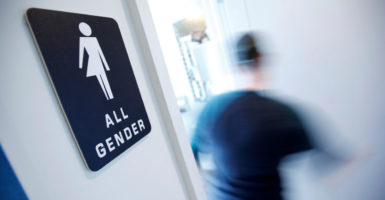 Lawmakers in Texas are working to ensure that men and women use separate bathrooms (Photo: Jonathan Drake/Reuters /Newscom)

Texas is taking measures to protect its citizens from laws that hinder “common sense and public safety” when it comes to transgender persons being allowed to use both men’s and women’s restrooms.

“This is a public safety issue,” Texas Lt. Gov. Dan Patrick, a Republican, said during a conference call with reporters Friday.

Kolkhorst said the bill, titled the Texas Privacy Act, will clarify who will be allowed to enter both men’s and women’s restrooms.

“I don’t view this bill as a transgender bill,” Kolkhorst said in the conference call. “It truly is about public safety … It is not against the law for a man to enter a woman’s restroom dressed looking like a man. There is nothing on the books here in Texas.”

The gender on a person’s birth certificate would determine which bathroom Texans could use.

“In Texas, there is a way to change your birth certificate and it is going before a district judge and presenting the date of either hormone therapy or the surgery and then the judge makes the decision that [the gender on] the birth certificate shall be changed,” Kolkhorst said.

Patrick said the bill is necessary because it is “common practice” that men and women use separate bathrooms.

“The people of Texas elected us to stand up for common decency, common sense, and public safety,” Patrick said in a statement. “This legislation codifies what has been common practice in Texas and everywhere else forever—that men and women should use separate, designated bathrooms.”

Patrick says the legislation has received bipartisan support and is viewed favorably by men and women, African-Americans, and Hispanics.

According to Patrick’s office, the hearing for the Texas Privacy Act is the first legislative hearing for privacy protection legislation following President Donald Trump’s revocation of President Barack Obama’s bathroom directive issued by the Justice and Education departments in May.

Obama’s directive allowed students identifying as transgender to be able to use the restroom that corresponded with their gender identity and mandated schools conform to the rule.

Trump rescinded the directive in late February, and a statement from the White House on bathroom usage specified that policy for those who identify as transgender should be decided by the states.

Opponents of the Texas bill say they are concerned that Kolkhorst’s legislation is too similar to the bathroom bill passed by North Carolina last March.

During a conference call with reporters, Patrick said that he does not believe the Texas Privacy Act will have adverse economic effects.

Critics of North Carolina’s bill claim the state lost out on economic opportunities because of the bill, CNN reports.

According to CNN, businesses chose not to expand because of the bill and the NBA moved its All-Star Game from Charlotte, North Carolina, to a location outside the state.

“It hasn’t moved the needle one iota,” Skvarla said in October.

Patrick argued the Texas bill was different than the North Carolina bill.

“I think there has been significant misrepresentation in what happened in North Carolina,” Patrick said. “Our bill is not the North Carolina bill … Our bill is very narrow and it deals with public safety, keeping sexual predators pretending to be transgender people [from entering] adult bathrooms.”

Ryan T. Anderson, a senior research fellow at The Heritage Foundation, told The Daily Signal that this bill is appropriate because it seeks to protect the dignity of all people.

The Texas Privacy Act hearing is scheduled for March 7 in the Texas Senate.