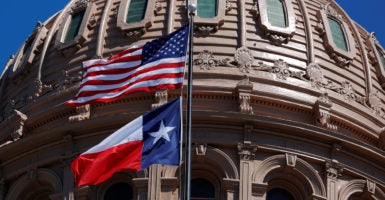 A Texas committee voted to keep a Confederate statue, but will add an anti-slavery plaque and kiosks to it, according to a Thursday report.

The monument advisory committee in Denton, Texas, voted 12-3 to preserve a Confederate soldier statue but add a plaque and audiovisual interviews bashing slavery and segregation, reported the Denton Record-Chronicle.

“I felt like we needed something that was more inclusive rather than exclusive,” said John Baines, chairman of the committee.

The chairman initially wanted to move the monument and erect a memorial dedicated to Denton County veterans in general, but two-thirds of the committee wanted to keep the statue in place.

The kiosks, placed one to either side of the monument, will display interviews with Denton veterans and Denton’s history regarding slavery.

“I’m almost afraid the kiosks will make it less of an art piece,” said Thomas Johns, a Denton resident. “So how to do that artistically in a way that it still feels monumental is going to be the challenge now.”

The committee’s decision will now go to Denton’s Commissioners Court, presided over by Commissioner Hugh Coleman.

“I think having electronics out in the weather may have operational problems,” said the commissioner. “If we do this, we want to do it right. I don’t want it constantly breaking down because it’s subject to wind, rain, and weather.”

The commissioner and county Judge Mary Horn say they would like more information before deciding or discussing their vote.

While cities like New Orleans have opted to tear down their Confederate monuments entirely, Denton’s decision resembles choices made by cities seeking to contextualize the memorials following the Charlottesville “Unite the Right” rally.