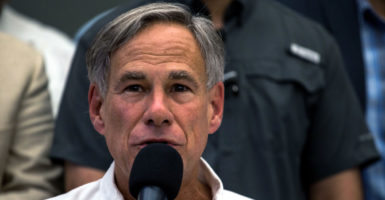 Republican Texas Gov. Greg Abbott announced Wednesday he is forming a counter-domestic terrorism task force in the aftermath of the shooting at a Walmart in El Paso.

He also instructed the Texas Department of Public Safety to assist in preventing domestic terrorism by having agents cooperate with the FBI’s Joint Terrorism Task Force and bolstering investigations into the activity of white supremacist and other extremist organizations, Fox 51 reported. The Aug. 3 shooting resulted in 22 casualties.

Today I announced a Domestic Terrorism Task Force in the wake of the El Paso shooting that killed 22 people.

The task force will be designed to fulfill four main objectives, Fox 51 reported, citing Abbott’s office. It will analyze threats in Texas and develop preventative measures; study ways to work with other agencies on prevention; work on protocols to counter domestic terrorism; and give legislative recommendations to the Texas government.

“However, let’s be clear this was white nationalist terrorism and Governor Abbott needs to diversify the people whom he listens to. The task force completely lacks any real form of diversity, as it stands, it is comprised of only law enforcement individuals and Republicans. The same Republicans who have been fanning the flames of white supremacy and criminalizing immigration for political profit for years,” Texas Democratic Party Executive Director Manny Garcia said.

The El Paso shooter reportedly told authorities he intended to “kill as many Mexicans as possible.”