Fracking Has Amazing Benefits. So Why Did This Texas Town Just Ban It? 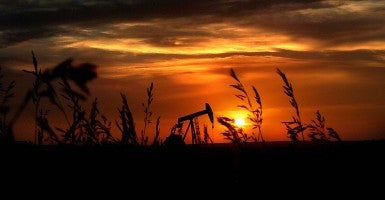 Last week, residents of Denton passed a ballot measure to ban hydraulic fracturing (fracking), the process used to extract oil and natural gas. The combination of directional drilling and fracking has enabled America to become the world’s largest producer of both oil and natural gas, driving economic growth and job creation across the country.

States are the primarily regulator of fracking, and those state regulators have maintained an incredibly strong environmental record while promoting economic growth. As recognized by the Environmental Protection Agency and other federal agencies, there has not been a single instance of water contamination as a result of fracking in the more than 1 million fracked wells in the United States. Texas also passed public disclosure laws in 2011 that require companies to list the chemicals used in the fracking process, another point of controversy.

So why the ban in Denton? Frack Free Denton, the group leading the charge (and which received a large chunk of its funding from Washington-based Earthworks) raised a number of concerns leading up to the vote, many of them misguided or completely unfounded. The group claims it is bad news for property owners because it will devalue homes, but county property assessors are saying that’s simply not true. It is truly bad news for mineral rights owners who now cannot take advantage of the tremendous wealth underneath their soil.

There has not been a single instance of water contamination as a result of fracking in the more than 1 million fracked wells in the U.S.

Then there’s the claim that fracking will threaten air quality. Energy in Depth’s Steve Everley writes:

It’s worth noting, however, that the “ozone/smog issue” is a central plank in the anti-shale crowd’s agenda (part of its gradual shift of emphasis toward air quality). It began in earnest when former EPA regional administrator Al “crucify them” Armendariz released a report in 2009 alleging that emissions of ozone precursors from oil and gas operations in the Barnett Shale were more than twice those emanating from mobile sources (i.e. cars and trucks). Given Dallas-Fort Worth’s well-known air quality problems, the study was cited far and wide.

The problem with Armendariz’s study—and other recent research suggesting harmful emissions from shale development—is that it relied on a modeling exercise that extrapolated an outlier of data into a broader trend. Proof of that has come from the Texas Commission on Environmental Quality, which has used state-of-the-art air quality monitors in the region to conclude not only that emissions from mobile sources are a larger contributor to smog, but that oil and gas operations have a minimal-at-worst impact.

Frack Free Denton also claims fracking is a drain on the local economy, but it’s clear that one of the brightest spots in the American economy over the past six years has been oil and gas production. Fracking is a necessary part of that process. There’s no economic gain to be had from Denton’s fracking ban, but there’s a lot to be lost.

Private property owners should have the freedom to make decisions about how they manage the resources on their land—after all, they’re the ones who stand to benefit or be harmed based on those decisions—so long as laws and sensible regulations protect against harming others. It’s unfortunate that fear mongering, rather than the facts, played more of a role in this decision.