How the Administration Is Taking Back the Courts 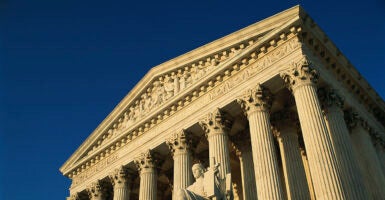 The oath for federal judicial office says judges must “administer justice without respect to persons, and do equal right to the poor and to the rich.” (Photo: Ron Watts/Getty Images)

Our system of government and the liberty it provides are compromised when judges decide cases based on their own personal views and political beliefs rather than the law.

If the American people and their elected representatives make the law, then elections are critical, but if judges effectively amend or undermine the law under the guise of interpreting it, then their appointment is critical.

That is the switch that has occurred. Judges today are far more powerful than they were designed to be. Many judges do exactly what our Founders and most brilliant judges—like George Mason, Justice Benjamin Curtis, Justice George Sutherland, Justice Robert Jackson, and Justice Clarence Thomas—warned about. And as a result, the process for appointing them is much more political and divisive than it should be.

In a 2002 speech, Justice Antonin Scalia warned that the more we reject originalism as the proper approach to judging and come to accept “living constitutionalism” as an acceptable or desirable method of interpretation, the more choosing those judges will be “a very political hot potato. Every time you need to appoint a new Supreme Court justice, you are going to have a mini-plebiscite on what the Constitution means.”

Who nominates and appoints federal judges matters. When he was a senator in 2005, Barack Obama said that judges should decide cases based on their “deepest values,” “core concerns,” “broader perspectives on how the world works,” “the depth and breadth of [their] empathy,” and “what is in the judge’s heart.” As president, many of the men and women he nominated for federal judgeships fit this mold.

Such views would likely have struck the Framers as extremely strange and profoundly wrong.

The current president, on the other hand, seems to have embraced the Framers’ original design for the judiciary. In their hearings before the Senate Judiciary Committee, for example, President Donald Trump’s judicial nominees have consistently pledged to put aside their personal views, to interpret the Constitution and statutes as written, and to apply the law impartially.

In those confirmation hearings, some senators have aggressively pressed these nominees for their personal views on certain issues that already are, or certainly will be, before the federal courts. They demand that nominees embrace particular legal positions and, in various ways, provide evidence of how they would decide future cases that involve specific issues.

In other words, they seek the opposite of what Justice Ruth Bader Ginsburg said she would provide in her 1993 confirmation hearing: “no hints, no forecasts, no previews.”

Advocates of a powerful, political judiciary not only accept that judges decide cases based on their personal views and priorities, but also endorse their doing so. They want to be sure that under the guise of interpreting statutes and the Constitution, judges will advance their political agenda.

Conditioning support for judicial nominees on their commitments, hints, or forecasts of future decisions is like hiring umpires or referees based on the teams they promise to favor in the upcoming season. Ginsburg said that providing such hints or forecasts would “display disdain for the entire judicial process.” And she was right.

Pressing judicial nominees for commitments or previews about future cases is dangerous for another reason. Many of these nominees are already judges on federal or state courts and therefore have already taken an oath to fulfill their judicial duties impartially. The oath for federal judicial office specifically says that judges must “administer justice without respect to persons, and do equal right to the poor and to the rich.”

Resisting efforts to extract commitments or to disclose personal views is therefore necessary to preserve impartiality not only for the future, but also, in many cases, in the present as well.

Advocates of a more powerful, political judiciary are opposing current nominees in unprecedented ways. From 1789 through 2016, for example, the Senate confirmed more than 95% of judicial nominees without opposition. That figure has dropped to 25% under the current president.

The Senate had to take a separate vote to end debate on fewer than 4% of Obama’s judicial nominees who were confirmed at this point in his presidency, compared to 80% for Trump.

Despite these and other opposition tactics, as of Sept. 9, Trump has appointed 24% of the entire federal judiciary. More important, he has already appointed 53 judges to the U.S. Court of Appeals, which has the last word on nearly all cases in the federal court system. That constitutes 30% of this middle level of the federal court system, compared to an average of less than 19% at the same point under the previous five presidents.