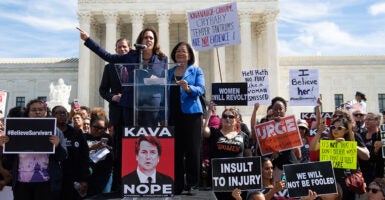 For those keeping track, here’s a list of Democratic Party “norms” for placing new justices on the Supreme Court of the United States, as they stand today:

Norm No. 1: When Democrats are in charge of both the Senate and the White House, they are free to nominate and confirm any justice they please, as quickly as they please, as they did in the cases of Ruth Bader Ginsburg, Stephen Breyer, Sonia Sotomayor, and Elena Kagan.

Norm No. 2: When Democrats only run the White House, they are free to nominate any Supreme Court justice they please, and they also get to dictate whom Republicans are allowed to confirm, as they tried to do in the case of Merrick Garland—blessed be his memory.

Norm No. 3: When Democrats run neither the nomination process nor the confirmation process, they get to dictate who is confirmed to the Supreme Court, as they argue today in the case of Ruth Bader Ginsburg’s replacement.

Norm No. 4: If Republicans fail to adhere to all these rules, Democrats have a license to burn everything down to the ground. (And, of course, I only mean that 90% metaphorically.)

When former Vice President Joe Biden implores us to “cool the flames that have been engulfing our country,” he isn’t speaking to Democrats, who have now threatened to pack the courts, eliminate the legislative filibuster and Electoral College, make D.C. a state, and use impeachment as a political cudgel to stop a constitutionally legitimate confirmation process, but rather to warn moderate Republican senators that they shouldn’t do what he argued was their “constitutional duty” only four years earlier.

In his Senate speech during the debate over Garland, Mitch McConnell argued that presidents “have a right to nominate, just as the Senate has its constitutional right to provide or withhold consent. In this case, the Senate will withhold it.”

McConnell’s contention was indisputably true. It is also true that denying Garland a confirmation vote was a political risk. Voters had a chance to punish the GOP for that position—or not.

Yet, scores of liberal pundits and politicians concocted preposterous arguments to claim that the Republicans were illegally “stealing” the seat, which, if true, means that McConnell is, at worst, a hypocrite and that his critics are, at best, demanding that Republicans break the law.

In a New York Times op-ed in 2016, Biden maintained that McConnell had a “constitutional duty” to give the president’s nominee a vote. If this is true, Biden is now arguing that McConnell’s 4-year-old political decision should trump the constitutional order.

If it isn’t, then he was lying. Per Biden, McConnell abandoned his “responsibility to the voters of this nation” back then. Surely, his stance now is better?

As a matter of fact, the then-vice president not only argued that denying Garland a vote was unconstitutional but also made the case that it was imperative for the country to have a full complement of nine judges in case the court was asked to adjudicate an election dispute.

He claimed that as Senate Judiciary Committee chairman, a position he held for decades, he would have moved forward with a nomination “even a few months before a presidential election.”

In other words, Biden has forsaken a 36-year position and let the GOP Senate majority leader’s 2016 position become the norm in perpetuity.

Of course, no one believes that.

When examining “norms,” it’s worth our remembering that four years have passed since the Garland nomination and that one of the events that transpired in those intervening years was the confirmation of Brett Kavanaugh.

I’m pretty sure Sen. Kamala Harris, D-Calif., wasn’t cooling “the flames that have been engulfing our country” when she entered unsubstantiated gang-rape charges against an eminently qualified Supreme Court nominee into the record.

Nor was Sen. Dianne Feinstein, D-Calif., when she leaked the allegations against Kavanaugh to the media before allowing her fellow senators to see them.

Nor was Sen. Ed Markey, D-Mass., who refused to meet with the nominee, calling him “illegitimate” before asking even a single question.

Nor was Sen. Mazie Hirono, D-Hawaii, when she said that Kavanaugh didn’t deserve the presumption of innocence.

Republicans should remember that indecent partisan spectacle every time Democrats are lecturing them about Trump and “norms.” They should also recognize that they have been breaking judicial norms since Robert Bork’s nomination.

Trump is correct that Senate Minority Leader Chuck Schumer would give zero pause in confirming a justice today had roles been reversed. This is one reason why unilaterally surrendering to these always-evolving standards would amount to political malfeasance.

Long story short: Democrats keep inventing imaginary new “norms,” and then threatening to blow up long-standing, real-life standards of American governance if the GOP fails to surrender to them. That’s not how this works. That’s not how any of this works.