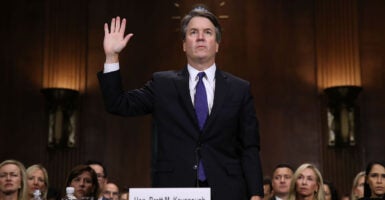 Judge Brett Kavanaugh is sworn in before testifying to the Senate Judiciary Committee during his Supreme Court confirmation hearing Sept. 27, 2018, in Washington, D.C. Kavanaugh was called back to testify about claims by Christine Blasey Ford. (Photo: Win McNamee/Getty Images)

We don’t know yet President Donald Trump’s pick for the next Supreme Court nominee, but we do know one thing for sure: The media won’t treat her fairly.

Two years ago, during the Brett Kavanaugh hearings, the media exploded with stories of sexual harassment and abuse based on hearsay and misinformation. Their goal: to destroy Kavanaugh’s reputation and deny him Senate confirmation. It was a smear campaign, not fair reporting about his real record, or how he would rule as a Supreme Court justice.

We can expect the same—or worse—in the coming weeks. Already, the next nomination has turned deeply political. For the mainstream media, no story will be off the table—as long as it matches their far-left agenda and keeps a constitutionalist judge away from the court. Just as they did with Kavanaugh, they’ll ignore any story that contradicts their views.

That’s where the work of The Daily Signal comes in.

After Kavanaugh was nominated, Kelsey Bolar and Lauren Evans interviewed two of Kavanaugh’s female clerks, Sarah Pitlyk and Rebecca Taibleson, for a Daily Signal documentary. Pitlyk, who had a baby shortly before her clerkship commenced, shared how Kavanaugh had worked to ensure that she had work-life balance. Taibleson told of how Kavanaugh had given her extra time off for her wedding—despite that it came at a time when she and Kavanaugh were working on an important opinion.

>>> Watch our documentary with two of Kavanaugh’s former clerks:

Bet you didn’t hear either of these women’s experiences from the big media outlets.

And that’s not all we did. We covered Juanita Broaddrick discussing why she believed Kavanaugh was innocent and hadn’t assaulted Christine Blasey Ford. Rachel del Guidice interviewed Missy Carr, who had known Kavanaugh since high school and who spoke up in support of his character. Fred Lucas looked at four claims liberals were making against Kavanaugh, and fact-checked them.

From Kavanaugh’s nomination to his swearing-in ceremony, The Daily Signal was there—providing much-needed context and sharing the facts with our millions of readers.

Whoever the next nominee is and no matter what the rest of the mainstream media says about her, we’re determined to cover her fairly, accurately, and in-depth.

But we depend on your support to be able to do that.

The Daily Signal has always been free. We know in the era of fake news, it’s important to give people a resource they can rely on.

But delivering factual, top-notch reporting is expensive and time-consuming.

With your support, we’re confident we’ll be able to cover this next nominee just like we covered Kavanaugh. Please consider making a donation today.