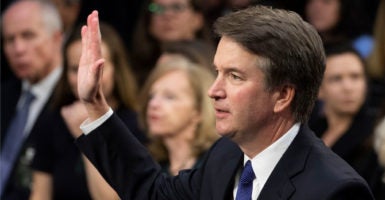 "I have known Brett since I was maybe 16, and I still know him today," Missy Carr says of Brett Kavanaugh, here being sworn in before testifying to the Senate Judiciary Committee. (Photo: Alex Edelman/CNP/AdMedia /Newscom)

A peer and friend who knew Supreme Court nominee Brett Kavanaugh as a high school student is vouching for his character amid accusations from a woman that Kavanaugh sexually assaulted her when they were teens.

“I certainly have some strong feelings about the timing of this, but that is not going to do anybody any good,” Missy Carr, a 1985 graduate of Georgetown Visitation Preparatory School, told The Daily Signal in a phone interview Monday.

“What I would say is I have known Brett since I was maybe 16, and I still know him today,” Carr, 51, said. “I knew him in all kinds of social situations and what is being described—I also, by the way, know Mark Judge, obviously—and the scenario that is being described is not one that I could ever put either one of those guys in, even under the influence of alcohol or any of that.”

Carr is one of 65 women who knew Kavanaugh when he attended the all-boys Georgetown Preparatory School and signed a letter published Sept. 14 that vouches for the character of the Supreme Court nominee.

Kavanaugh’s accuser said Mark Judge, a classmate of Kavanaugh’s, was present during the alleged assault at a house party attended by a small group of teens.

Christine Blasey Ford, now a 51-year-old research psychologist in Northern California, told The Washington Post that Kavanaugh held her down, groped her, and tried to remove her clothes in a bedroom during a summer party in the early 1980s in Montgomery County, Maryland.

Ford said both males were drunk at the time.

Kavanaugh has twice issued absolute denials of ever doing such a thing, the second time Monday after Ford’s name came out.

Judge denied such an incident occurred in an interview with The Weekly Standard published Friday.

Ford reportedly wrote a confidential letter in July describing the incident and sent it via Rep. Anna G. Eshoo, D-Calif., to Sen. Dianne Feinstein, D-Calif., who is on the Senate Judiciary Committee.

Ford revealed her identity for the article published Sunday by The Washington Post ahead of the committee’s scheduled vote Thursday on Kavanaugh’s nomination.

“They are not the kind of people, those guys are not the guys who I would ever put in that situation,” Carr said of Kavanaugh and Judge, adding:

There were other guys who I would be like, ‘Well, maybe … ,’ but certainly not Brett, not Mark. And I know Brett has dedicated his life to serving the country and being a judge and living a good, solid life. I think his goals were clear when he was very young, what he wanted to do. I don’t think he would do anything to jeopardize that, and I just think that that’s why I support him.

“We are women who have known Brett Kavanaugh for more than 35 years and knew him while he attended high school between 1979 and 1983,” the letter signed by Carr and the 64 other women reads.

“For the entire time we have known Brett Kavanaugh, he has behaved honorably and treated women with respect. We strongly believe it is important to convey this information to the Committee at this time.”

Carr and the other signatories say they want to vouch for Kavanaugh’s character amid accusations from Ford, who previously had said she did not wish to be identified.

Ford is willing to testify publicly, according to her lawyer, Debra Katz.

“She clearly considers this an attempted rape,” Katz said Monday on NBC’s “Today” show. “She believes that if it were not for the severe intoxication of Brett Kavanaugh, she would’ve been raped.”

President Donald Trump nominated Kavanaugh on July 9 to fill the seat of Justice Anthony Kennedy, who announced his retirement June 27.

“He is a good husband, father [and] judge, clearly, and that is what I think the focus needs to be,” Carr said of Kavanaugh.

Carr, in an email following her phone interview with The Daily Signal, said that after doing some research she is more convinced that the accusations are politically motivated.

“Since we spoke, I saw the Facebook page of Debra Katz, [whose] Facebook profile page is anti Trump with ‘Persist & Resist’ march photos,” Carr wrote in the email. “The accuser is a liberal activist. Those things combined with the timing lead me to believe this is politically motivated. The story is not consistent with the man I know.”

Virginia Hume, another of the 65 signers of the letter supporting Kavanaugh, wrote in a Sept. 14 op-ed in The Weekly Standard that the swiftness with which the letter came together should itself speak to his character.

“The letter was conceived and drafted by friends of Brett’s, and it was drafted after allegations came out on Thursday. I learned about the letter from a friend and fellow signatory,” Hume wrote. “Others learned about it the same way. Those surprised at the speed with which it came together should see it as yet another testament to Brett’s excellent reputation.”

Another letter from women who attended Yale College with Kavanaugh, released Aug. 30, also praised his character.

“Before he was a lawyer and a judge, Brett was an excellent student, a dedicated basketball player, and a great friend,” the letter reads. “He earned top grades, but was always humble; he never showed off his obvious brilliance or acted arrogantly. He was kind, accessible, and had a quick sense of humor. Brett was and remains a loyal friend to us and to many of our classmates.”

The letter from the 65 women who knew Kavanaugh in high school specifically spoke to Kavanaugh’s treatment of women:

Brett attended Georgetown Prep, an all-boys high school in Rockville, Maryland. He was an outstanding student and athlete with a wide circle of friends. Almost all of us attended all-girls high schools in the area.

We knew Brett well through social events, sports, church, and various other activities. Many of us have remained close friends with him and his family over the years. Through the more than 35 years we have known him, Brett has stood out for his friendship, character, and integrity.

In particular, he has always treated women with decency and respect. That was true when he was in high school, and it has remained true to this day.

The letter says its signers come from a “broad range of political views,” but were able to speak with a unified voice in support of Kavanaugh because of their knowledge of his character.

“Brett Kavanaugh and I have been good friends since high school,” Maura Fitzgerald said. “I dated him in college and he was and is nothing like the person who has been described. He always conducted himself honorably with me at all times when we were together. He was always a perfect gentleman, and I vouch for him completely.”

“I’ve been friends with Brett Kavanaugh for over 35 years, and dated him during high school,” Kane said. “In every situation where we were together he always was respectful, kind and thoughtful. The accusations leveled against him in no way represent the decent young man I knew. We remain good friends and I admire him as a husband, father and professional.”

This is a completely false allegation. I have never done anything like what the accuser describes–to her or to anyone. Because this never happened, I had no idea who was making this accusation until she identified herself yesterday.

Kavanaugh said he is willing to respond to questions about the allegations from the Senate Judiciary Committee.

White House counselor Kellyanne Conway told Fox News on Monday that Ford should not be ignored, and that both Ford and Kavanaugh should be heard by the Senate “in sworn testimony.”

The Judicial Crisis Network was set to announce a $1.5 million ad campaign featuring a longtime Kavanaugh friend in support of his confirmation by the Senate.