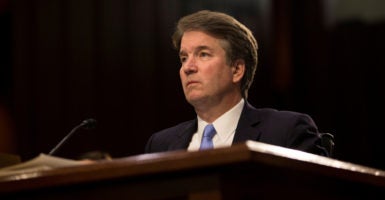 Supreme Court nominee Brett Kavanaugh issued his second absolute denial of an accusation of sexual misconduct while he was in high school, and said he is willing to take questions from senators on the allegation.

“This is a completely false allegation. I have never done anything like what the accuser describes—to her or to anyone,” Kavanaugh, a judge on the D.C. Circuit Court of Appeals since 2006, said in a statement released Monday morning by the White House.

Kavanaugh also said he is willing to take additional questions from the Senate Judiciary Committee on the allegation by Christine Blasey Ford, as Democrats made an 11th-hour attempt to stop his nomination.

The second denial comes after the previously anonymous accuser came forward to The Washington Post.

“Because this never happened, I had no idea who was making this accusation until she identified herself yesterday,” Kavanaugh said. “I am willing to talk to the Senate Judiciary Committee in any way the committee deems appropriate to refute this false allegation, from 36 years ago, and defend my integrity.”

Kavanaugh gave lengthy testimony to the Judiciary Committee earlier this month in three days of contentious hearings. The accusation did not come up until Thursday, a week before a scheduled committee vote on his nomination, as Sen. Dianne Feinstein, D-Calif., issued a vaguely worded press release.

Two retiring Republican senators who are highly critical of the Trump administration–Jeff Flake of Arizona and Bob Corker of Tennessee–have said a committee vote on Kavanaugh should be delayed until after members hear from the accuser. Both senators are members of the Judiciary Committee.

Ford, 51, has said Kavanaugh, 53, attempted to sexually assault her in a bedroom during a party at a house in suburban Maryland when the two were high school students.

She said Kavanaugh was drunk, as was a friend of his, Mark Judge, who she said was present. Judge has denied the incident occurred.