The Constitution Rejects the Premise of Judicial Supremacy. So Should All Americans. 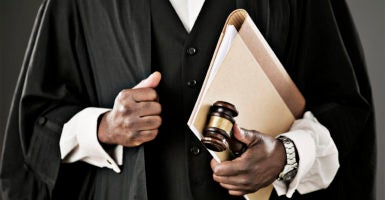 Recovering the Founders’ limited conception of the judicial power is necessary to preserving the integrity of the American people as a self-governing people. (Photo: Caiaimage/Chris Ryan/Getty Images)

Americans today are inclined to accept, without thinking much about it, the idea of judicial supremacy.

We think that the federal courts—and especially the Supreme Court—have an extensive discretion to decide for us the big questions of public policy that come before the nation.

After all, the Supreme Court has taken upon itself the authority to decide whether and to what extent abortion may be regulated, and, more recently, to decide the definition of marriage.

Moreover, we think that the court’s decisions on such questions are final, that there is no way the people or their representatives can effectively assert their own understanding of the Constitution against what was laid down by the judges.

As I explain in a new “First Principles” paper for The Heritage Foundation, Americans should reconsider this uncritical embrace of judicial supremacy.

A properly functioning judiciary, he contended, will be the “least dangerous branch” of the federal government and the “weakest of the three departments of power.”

The power of judicial review, Hamilton explained, is essential to maintaining a limited Constitution. But judicial review does not bestow on courts a wide-ranging discretion to decide what is good and just for the country.

Rather, it empowers courts to strike down laws only in those cases in which there is an “evident opposition” between the law and the Constitution.

The judicial power, in other words, exists to defend the clear provisions of the Constitution, not to empower judges to find new, previously unheard of rights, based on novel theories.

Moreover, Hamilton reminds us that the Founders never intended the courts to have an unfettered power to determine the meaning of the Constitution without having to answer to the people or their political representatives.

After all, Hamilton presents the judiciary as the weakest branch in part because it has to “ultimately depend on the aid of the executive arm for the efficacy of its judgments.”

That is as much as to say that the executive may decline to lend its aid to the courts when they have overstepped the proper bounds of their power.

Finally, The Federalist Papers remind us that judges who abuse their judicial authority are subject to impeachment. Judicial usurpation of the powers of the other branches of government, Hamilton argued, would be deterred by “the power of instituting impeachments in one part of the legislative body, and of determining upon them in the other.”

The power over impeachment “alone” would provide “a complete security” against an overreaching judiciary, because there “can never be a danger that the judges, by a series of deliberate usurpations on the authority of the legislature, would hazard the resentment of” Congress, which possesses “the means of punishing their presumption, by degrading them from their stations.”

Recovering the Founders’ limited conception of the judicial power is necessary to preserving the integrity of the American people as a self-governing people.

By rejecting judicial supremacy, we ensure that when the people’s will is thwarted by the courts, the people, through their political representatives, still retain the authority to reassert their will when they have not been persuaded by the reasoning of the judges.

That surely is essential to the self-respect of a self-governing people, that they must be persuaded—not commanded—by the courts.

That, too, is the promise of the American experiment: self-government under the laws and the Constitution, not under the discretionary supervision of judges.