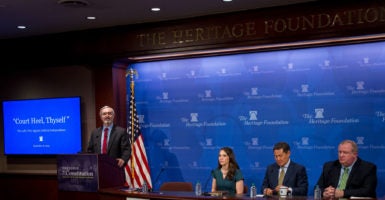 The confirmation process for Supreme Court justices has deteriorated because the process has become about politics, legal experts say.

“I think unfortunately we’ve reached a new low,” Carrie Severino, chief counsel and policy director for the Judicial Crisis Network, said Monday as part of a “Preserve the Constitution” panel discussion at The Heritage Foundation.

Part of the blame for a more political process can be laid on judges who are “acting like politicians” instead of turning a blind eye to politics, Severino said at the event held the day before Constitution Day.

The landscape for judicial confirmations would look different, she said, if judges kept their politics out of the equation.

“If you had justices who were trying to have an objective approach with the law rather than having a judicial philosophy that almost invites one’s own personal philosophy in, you wouldn’t have to have this process,” she said of hotly contested Senate confirmations for judges.

Also on the panel were John Yoo, a former deputy assistant U.S. attorney general who is the Emanuel S. Heller professor of law at the University of California, Berkeley School of Law, and Thomas Jipping, deputy director of Heritage’s Edwin Meese Center for Legal and Judicial Studies at The Heritage Foundation. John Malcolm, vice president of Heritage’s Institute for Constitutional Government, acted as moderator.

Yoo said judges should refrain from commenting on anything political if they are serious about taking politics out of the judicial sphere.

Wouldn’t it be better if the chief justice just pretended he never read the newspapers and felt he had to make a statement about what people are saying about federal judges in the political realm?  The fact that Chief Justice Roberts feels that he ought to respond to and participate in political debates is only encouraging more of these efforts to influence [the Supreme Court’s] decisions through political pressure.

Yoo said the latest attack on Justice Brett Kavanaugh, through a story published in The New York Times over the weekend about another purported instance of sexual misconduct, is an example of how far the left will go to intimidate justices and attempt to influence the court.

“Kavanaugh just joined the bench,” Yoo said. “I don’t think the Democrats seriously think they’re going to impeach him, but they think they might be able to affect him and they think they can affect the next people who are going to be confirmed for future vacancies at the Supreme Court.”

Heritage’s Jipping said the left’s attacks on the personal beliefs of some judges when it comes to faith and other convictions are also inappropriate.

“Why would [Sen.] Dianne Feinstein care about what Amy Barrett’s religious beliefs are?” Jipping asked,” adding:

Why would Sen. [Richard] Blumenthal attack a nominee because he belongs to the Knights of Columbus? … For that matter, why would senators care why a judicial nominee wrote something in their school newspaper 25 years ago? It’s because the left believes judges decide cases based on their personal views.

So they want to know what those personal views are, and these are all bits and pieces that they say that they believe will tell them kind of what’s in the judge’s or the nominee’s heart.

Jipping added that the left relies on personal attacks on conservative nominees to fill vacancies because the left sees it as a way to produce a legacy on the courts.

“The real issue, and the issue that must be debated, are differences in the power of judges and how judges go about approaching what they do,” Jipping said.

“And the reason that one side uses tactics like that, and tried to destroy people personally, is because the kind of judiciary they want is an all-powerful judiciary where their entire agenda is in that basket; they’ll do anything to try to achieve it.”