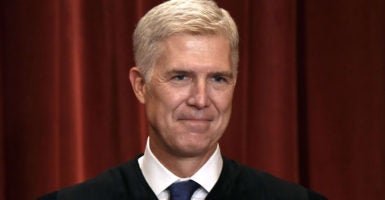 “A person can be both a committed originalist and textualist and be confirmed to the Supreme Court of the United States,” says Justice Neil Gorsuch. (Photo: Olivier Douliery/CNP/AdMe /SIPA/Newscom)

Supreme Court Justice Neil Gorsuch touted the importance of faithfulness to the Constitution in an address during the 2017 National Lawyers Convention in Washington, D.C.

“A person can be both a committed originalist and textualist and be confirmed to the Supreme Court of the United States,” Gorsuch said at the event Thursday hosted by the Federalist Society, a conservative legal organization.

The justice said it is the role of those serving on the courts to look to the Constitution rather than society in practicing law. “The job of a judge is not forward-looking but backward; it is applying pre-existing law,” Gorsuch said.

At one point, Gorsuch asked the crowd of hundreds if they thought his commitment to the original meaning of the Constitution was important in his role on the bench.

“I want to know what you think, all of you,” Gorsuch asked. “Should I just keep on asking about the text and original meaning of the Constitution?”

After being answered by vigorous applause, Gorsuch said, “Maybe these questions are pretty popular after all.”

He also encouraged the law students and the young lawyers in attendance to stick to ideals set by the Constitution.

“Even if … you might find yourself the only person in a class or in your office who holds to textualism, it would still be OK to say so, because what matters isn’t whether an idea is popular, what matters is whether it is right,” Gorsuch said.

The 50-year-old Supreme Court justice promised that he would remain faithful to the guidelines laid out in the Constitution.

“Originalism has regained its place at the table with the Constitution interpretation and textualism in the reading of statutes … and neither one is going anywhere on my watch,” Gorsuch said.