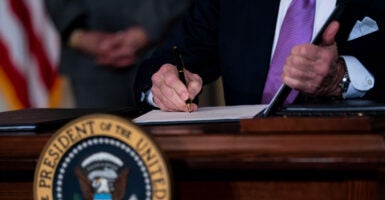 President Joe Biden has announced the creation of a commission to examine “reforming” the courts. This move is not only a “solution” in search of a problem, but will itself likely damage the rule of law and the independence of the judiciary.

It is based on the dangerous idea that the political branches should manipulate the very design and structure of the judiciary until it produces decisions that fit a particular ideological or political agenda.

That is no exaggeration. In August 2019, five Senate Democrats—four of whom serve on the Judiciary Committee—filed a legal brief written by Sen. Sheldon Whitehouse, D-R.I., in a Supreme Court case challenging a New York state law that restricted transport of a licensed firearm outside of one’s home.

The brief closed with these words: “The Supreme Court is not well. And the people know it. Perhaps the Court can heal itself before the public demands it be ‘restructured in order to reduce the influence of politics.’”

Then in March 2020, as the Supreme Court was to hear arguments in an abortion-related case, then-Senate Minority Leader Charles Schumer, D-N.Y., delivered his warning in person. Speaking on the Supreme Court steps, he proclaimed:

One version of Whitehouse’s restructuring is commonly called “court packing,” and Biden stated flatly during the 2020 presidential campaign that the American people “don’t deserve” to know his position on it. Court packing is Congress’ creation of new judicial positions that the president can immediately fill.

The term was coined in 1937 during debate on President Franklin Roosevelt’s court packing proposal, which the overwhelmingly Democratic Congress rejected as a plan to politicize the judiciary and destroy its independence.

The president, with the Senate’s consent, has the power to appoint judges. Even without expanding the Supreme Court, Roosevelt changed it the old-fashioned way, by replacing eight of its nine members in less than six years.

Court packing is different in two major ways. First, because federal judges have unlimited terms, they decide when most vacancies occur. Court packing gives that power to the political party controlling the executive and legislative branches.

Second, Congress’ periodic creation of new judgeships has been driven by the judiciary’s administrative needs. The Supreme Court has had nine members since 1869 and decides fewer than half the cases each year than it did just a few decades ago.

Court packing expands the judiciary not because it needs additional positions, but deliberately to change the judiciary’s ideological composition and, therefore, to make more likely decisions that serve certain political interests.

While candidate Biden said in a town hall event that he was “not a fan of court packing,” he would not rule it out.

Many who supported Biden’s election, however, have not been so cagey. The group Demand Justice, for example, has already launched a campaign to convince the now-forming commission to endorse adding four seats to the Supreme Court.

One week before the November 2020 election, The New York Times published a bevy of pieces about how to “fix the Supreme Court.” Its ideas included creating a new national court of appeals, judicial term limits, removing the Supreme Court’s discretion over the cases it considers, and significantly expanding the lower courts.

Biden is now fulfilling a pledge he made during an October 2020 interview broadcast on “60 Minutes.” He proposed a bipartisan commission to make “recommendations as to how to reform the court system because it’s getting out of whack—the way in which it’s being handled and it’s not about court packing.”

He did not explain how the court system is “getting out of whack,” though he did comment that the “last thing we need to do is turn the Supreme Court into just a political football, whoever has the most votes gets whatever they want.”

According to news reports, the commission will have between nine and 15 members. Three individuals have reportedly been chosen for the panel: Caroline Fredrickson, former president of the American Constitution Society; Harvard Law School professor Jack Goldsmith, who served as an assistant attorney general in the George W. Bush administration; and Cristina Rodriguez, a deputy assistant attorney general during the Obama administration.

Presidents create commissions for different reasons. These panels can ensure that proposals never see the light of day, or they can give the appearance of independence or legitimacy to ideas that would be too politically hot coming directly from an administration. Commissions can be also be formed and staffed as ways for outside groups to have outsized influence on the development of policy.

The group Take Back the Court pulls no punches. “Congress must add seats to the Supreme Court,” it says, in order to “restore the right to vote, ensure reproductive freedom, halt our climate emergency, and save democracy.”

Whatever these objectives mean, or whether the appointment of a few judges can achieve them, the point is that court “reform” is all about manipulating the judiciary, almost creating a new judiciary, so that it delivers the political goods.

The problem with this commission is its supposed reason for being: that there is some crisis in the courts that requires “reform.” The crisis is simply that the left does not like some of the Supreme Court’s decisions or many recent judicial appointees.

Not getting your way every time, however, is not a crisis. Nor is this the first time that folks at a certain place on the ideological spectrum have grumbled about the judiciary.

Judicial independence is literally one of the reasons for American independence. The Declaration of Independence’s list of grievances includes that King George was manipulating the courts. The Constitution addressed that by giving judges unlimited terms and prohibiting Congress from cutting judicial pay.

The Biden administration and Congress should follow that advice today.