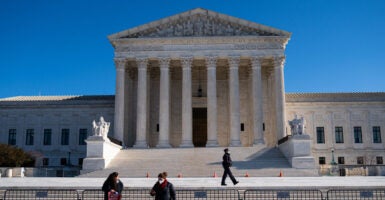 Packing the federal courts would make the judiciary a tool of the political branches rather than independent from them. Pictured: A security guard walks in front of the U.S. Supreme Court on Jan. 7. (Photo: Robert Nickelsberg/Getty Images)

Political parties and candidates have different positions on issues, but should at least support the fundamentals of our system of government. Sounds simple, right? So how did court-packing become a serious topic for discussion?

Packing the federal courts would destroy not only the independence of the judiciary, but also the unique way that the U.S. Senate has participated in the legislative process for more than 200 years. That’s why control of the Senate will determine whether these fundamentals stay or go.

America’s founders believed that keeping the judiciary independent from political manipulation is “essential” for the kind of government they designed. In fact, in the Declaration of Independence, it’s listed among the reasons why we split from Great Britain. And it’s what makes our judiciary the envy of so many around the world.

“Court-packing” means vacancies would suddenly occur when Congress creates new judicial positions that a president of the same party can immediately fill. It would be like a hostile takeover of the judiciary, which would make it a tool of the political branches rather than maintaining its independence from them.

Court-packing is not a new idea. In 1937, fresh from a landslide reelection, President Franklin Roosevelt proposed the same scheme. He thought it would sail through Congress since, after the 1936 election, Democrats had huge Senate and House majorities. But those Democrats resisted the temptation to manipulate the judiciary for political purposes.

Even the American Bar Association, which had surveyed lawyers across the country, opposed the idea. Testifying before the Senate Judiciary Committee in April 1937, the ABA said this threat to judicial independence had drawn a stronger reaction than any issue since the Civil War.

Both parties have used this to their advantage, preventing or improving legislation along the way. It is literally the single most distinctive feature of the Senate as a legislative body. But it would have to be destroyed to enact a court-packing scheme today.

Democrats’ 80-16 majority in 1937 would have made ending debate easy. Today, however, court-packing legislation would run headlong into a Senate filibuster. Passing that legislation, therefore, would require changing Senate rules to grease the legislative skids so that a simple majority could always get its way.

Court-packing today, therefore, puts not just one, but two branches of government at risk.

Our system of government provides the liberty we all enjoy. That happens by design, not by accident. Any elected official or candidate, regardless of party, who claims to believe in that system, therefore, should explicitly reject schemes that, like court-packing, would attack and permanently undermine it.

If Congress could put principle over politics in 1937 when only one branch was at risk, we must be even more resolute today when two branches hang in the balance.

This piece was originally distributed by Tribute Content Agency.