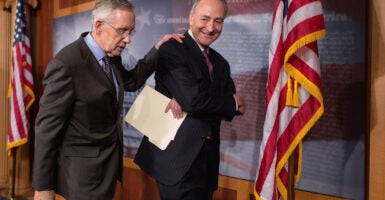 Senate Democrats eye abolishing the legislative filibuster if they regain control of the Senate. That would enable them to pack the Supreme Court if the presidential election goes Democrats' way. Pictured: Then-Senate Majority Leader Harry Reid, D-Nev., left, and Sen. Chuck Schumer, D-N.Y., now minority leader, leave a press conference Nov. 21, 2013, about the "nuclear option" that eliminated the filibuster on judicial nominations except for the Supreme Court. (Photo: Chip Somodevilla/Getty Images)

The concept of “court packing” has received a lot of attention recently, and rightly so.

That radical move—which Democrats rejected in the 1930s—would permanently damage the independence and impartiality of the judiciary. But it’s even worse than that. The steps necessary to achieve that goal would also permanently weaken the legislative branch.

America’s Founders applied their genius in many ways. For example, they recognized that government is necessary but that, without limits, it would destroy our liberty.

Those limits include the people setting rules for government in a written Constitution, the separation of government power into three branches, and even the division of Congress into two different houses.

These were not random ideas thrown together. They are parts of a design for government.

Whether by ignorance or intention, some are demanding that we break up this design, eliminate those distinctions, and dismantle this system of government. Eliminating the legislative filibuster in the Senate is part of that destructive plan.

The House of Representatives and the Senate are both part of the legislative process, but they are designed to participate in different ways.

The best example is that bringing a matter up for a vote requires not just a simple majority, but a supermajority. Rule 22 requires “three-fifths of the Senators duly chosen and sworn” (that’s 60) to invoke cloture, or end debate. A group of senators who lack the votes to defeat a bill on its merits, therefore, can prevent its passage by preventing any final vote at all. A failed attempt to end debate is a filibuster.

The Congressional Research Service describes this ability of the minority to keep debate going as “the single most defining feature of the Senate as a legislative body.”

As a result, for more than 200 years, the process of considering legislation in the Senate has been different from the process in the House. For all that time, the ability of the minority to assert itself that way has frustrated the majority and each political party has been on each side of legislative filibusters.

During the 36 years that Joe Biden served in the Senate, for example, 92% of the cloture votes were on legislative matters, rather than nominations, and he voted 130 times to filibuster legislation.

Every now and then, someone suggests eliminating the minority’s unique role in the Senate’s legislative practice by equalizing the votes needed to end debate and to pass legislation. In other words, they want to make the Senate a smaller version of the House so that the majority gets its way every time.

They want to destroy what makes the Senate unique as an institution and fundamentally change the way the legislative branch operates.

In January 1995, for example, as the 104th Congress opened, then-Sen. Tom Harkin, D-Iowa, offered an amendment to a resolution for organizing Senate committees that would have eliminated the legislative filibuster.

Three things are important about that.

First, Harkin proposed changing Rule 22 through the process provided by Senate rules, a public process that would involve hearings in the Rules Committee.

Second, under Harkin’s proposal, the first vote to invoke cloture would require 60 votes, as Rule 22 requires today. If that vote failed, the threshold would decline on successive cloture votes to 57, 54, and then a simple majority. Harkin called this a “new procedure for ending filibusters” and said that “a majority of the Senate ought to be able to end debate and get to the merits of the legislation.”

Fifteen years later, with a Democrat in the White House and with control of the Senate, Democrats again talked about eliminating the legislative filibuster so that a simple majority could get its way whenever it wanted.

Then-Sen. Robert Byrd, D-W.Va., who had served in the Senate for 51 years, wrote a “Dear Colleague” letter dated Feb. 23, 2010, arguing that any reform to Senate procedures should follow “the prescribed procedure for amending the rules.”

Efforts to “change or reinterpret the rules in order to facilitate expeditious action by a simple majority,” he wrote, are “grossly misguided.”

When Byrd died a few months later, then-Vice President Biden—who ranks 18th on the list of longest-serving senators in history—praised Byrd as one of his “mentors.”

Those who (at least today) want to end the legislative filibuster use more than a little misdirection. They say, for example, that the filibuster is a “Jim Crow relic,” referring to how the filibuster was used by segregationist Democrats to fight civil rights legislation.

But if the filibuster should be abolished because of how it has been sometimes used, Congress itself should have been eliminated long ago.

Both parties have used the filibuster in connection with legislation involving everything from treaties and tariffs to the national debt and the death penalty.

The Senate adopted Rule 22 in 1917 because a small group of senators blocked legislation to protect merchant marine ships from attack.

In 2006, Democrats used the filibuster to block both the Federal Marriage Amendment and a bill to repeal the estate tax. The filibuster can apply to any subject, across the ideological spectrum, and it can not only thwart bad legislation, but the threat of a filibuster alone can be the only effective incentive for achieving reasonable legislation.

While the filibuster was never intended to be part of the confirmation process, it had defined the Senate’s legislative process since the turn of the 19th century.

The Declaration of Independence identifies the purpose of government as securing our inalienable rights. The design and operation of government should be evaluated by that standard, rather than the achievement of certain political goals or the relative power of a political party.

Eliminating the legislative filibuster would be a dangerous idea, because it would destroy more of the limits on government that are necessary to protect our liberty.