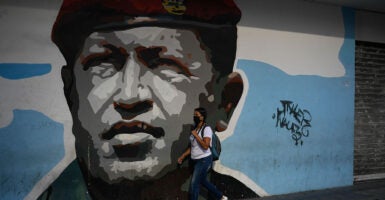 Almost from the moment Republicans said they intended to fill the Supreme Court seat vacated by the death of Justice Ruth Bader Ginsburg, Democrats began to vow they would pack the court if Republicans went through with their plan.

“If [Senate Majority Leader Mitch McConnell] holds a vote [on a Supreme Court nominee] in 2020, we pack the court in 2021. It’s that simple,” Rep. Joe Kennedy, D-Mass., said the weekend Ginsburg died.

As a Venezuelan, this is not the first time I have seen an authoritarian measure like this. Changing the rules also was a strategy of Hugo Chavez, the former president of Venezuela.

Chavez had two fundamental rules—expel those on the court who were not attached to his party, and add enough seats to ensure his will was done. Chavez increased the number of judges on Venezuela’s highest court from 20 to 32 in 2004, and in so doing secured victories for himself until his death in 2013.

By 2006, at the beginning of the judicial year, elected judges to Venezuela’s supreme court were chanting, “Uh, ah, Chavez won’t leave,” which is the classic slogan in support of the former dictator—making even more evident a rupture in the separation of powers.

You say that can’t happen here because the U.S. is a republic?

Chavez was elected by the people in 1998, and he consistently allowed elections since. But he fundamentally changed the country and its laws so that no candidate stood a chance against him.

Chavez began to disrespect the rule of law in 1999, his first year in office. Saying the country needed change after years of oppression of the poor, he changed the constitution, abused the rule of law, increased the size of the government, and diminished its institutions.

In multiple interviews before being elected, he specified that he would be neither a socialist nor authoritarian. Once in office, he did not keep his word and instead spread the phrase “fatherland, socialism, or death.” Thanks to his packed courts, nothing could be done.

Democrats are playing a dangerous game with their talk of adding seats to the Supreme Court. Even worse, their presidential candidate, former Vice President Joe Biden, is directly telling Americans he will not give a clear answer to the country about this topic until the elections get closer.

The results in Venezuela of this policy are crystal clear. Not playing by the rules only undermines the state of law and shows a willingness to change longstanding practices in the pursuit of power.

Authoritarian regimes always seek to change the rules once in power. They always claim it is only fair and is being done only to pursue a greater goal.

Here is the truth: Anyone can live in a dictatorship, but you need to be willing to defend certain principles to live in freedom. As a person who was a victim of these toxic policies, I openly condemn this attempt to change the rules of the Supreme Court to make things work for one side just because that side is not happy about the outcome.

A big part of expanding the government is controlling and reforming government institutions to ensure they serve your best interests as a politician. The United States represents freedom around the world, and it is essential its foundations be preserved.

Just like many Venezuelans who have suffered the consequences of tyranny for years, I cannot help but see a pattern of politicians obsessed enough with power to change the rules leading to even worse situations.

My country did not prevent court-packing, and its people are still victims of these courts that violate and do not respect the most basic rights. According to the Penal Forum, a Venezuelan network of pro-bono criminal defense lawyers, Venezuela holds more than 360 political prisoners.

These are the results of a corrupted judicial system created by dangerous politicians. Americans should not go down this road.