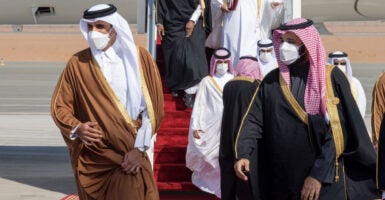 Saudi Arabia, the United Arab Emirates, Bahrain, and Egypt agreed to restore ties with Qatar during the 41st Gulf Cooperation Council Summit on Tuesday. The agreement marks the end of a dispute that has divided the Persian Gulf region since 2017.

The rift emerged following years of tension between Qatar and its Gulf Cooperation Council neighbors over many issues, including Qatar’s alleged support of the Muslim Brotherhood, Hamas, and other extremist organizations in the region. To address the concerns of council members, Saudi Arabia outlined a set of 13 conditions to be met by Qatar before entrance back into the council.

It is unclear whether Qatar has agreed to these demands, but the lifting of the blockade and restoration of ties is one less diplomatic headache for Washington.

Qatar hosts approximately 10,000 U.S. personnel who operate out of the Combined Air Operations Center at Al Udeid Air Base, one of the world’s most important U.S. air bases. Washington has been able to balance its relations with Qatar and other Gulf Cooperation Council partners, but division has weakened the Gulf Cooperation Council from addressing the Iranian threat and post-COVID 19 recovery.

This diplomatic victory from Washington paves the way toward full reconciliation in the Gulf Cooperation Council and hopefully a more united front in the Persian Gulf.

The Iranian threat will remain a major point of contention as Gulf states and Qatar navigate a way forward. With no clear policy articulated by the Gulf Cooperation Council, Gulf states fall on the spectrum of cooperation to condemnation of Iran. Saudi Arabia, Bahrain, and the UAE have pushed for unified action in the council to contain the Iranian threat, while Oman, Kuwait, and Qatar have maintained closer relationships with Iran.

Gulf states will continue to disagree on how to approach Iran, but the events of the Gulf Cooperation Council summit may build greater trust that will allow the U.S. to push for more robust military, security, and economic collaboration in the Gulf.

The Trump administration proposed the idea of a multilateral Middle East Strategic Alliance with its Arab partners. The initial U.S. concept, which included security, economic cooperation, and conflict resolution and deconfliction, generated considerable enthusiasm, but the project had received little traction due to the Gulf dispute.

The outcome of the Gulf Cooperation Council summit provides a more favorable environment for the U.S. to lay the strong foundations on which a future Middle East Strategic Alliance can be built.

Washington should work with partner countries in the Middle East to build confidence, and work on a step-by-step basis to lead up to the eventual creation of the Middle East Strategic Alliance. This joint framework would allow Washington to promote regional security and stability, while freeing up U.S. military forces for deployment in other regions.

As competition heats up in the Gulf region and other parts of the world, the U.S. has an opportunity to positively engage with its Gulf partners through a multilateral framework that will strengthen the Gulf Cooperation Council against economic and security challenges in the future.