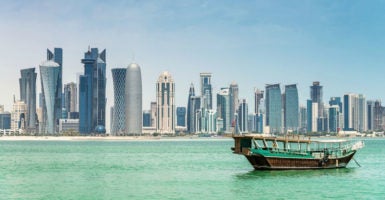 News surfaced on Monday that several Gulf states in the Middle East had suddenly cut diplomatic ties with Qatar, a Gulf state that borders Saudi Arabia.

The Daily Signal sat down with Luke Coffey, director of the Allison Center for Foreign Policy at The Heritage Foundation, for details.

News reports say that several Gulf states in the Middle East have cut ties with Qatar. What exactly happened?

The Kingdom of Saudi Arabia, the United Arab Emirates, Bahrain, the Maldives, and Egypt have all cut diplomatic ties with Qatar. All commercial land, air, and sea travel between Qatar and these nations has been severed, and Qatari diplomats living in those countries have been given 48 hours to leave.

Qatar has long supported Muslim Brotherhood groups, questionable Islamist factions in Syria and Libya, and has often been seen as being too close for comfort with Iran—a major adversary of Sunni Arab states in the Gulf.

This is not the first time something similar like that has happened, albeit on a much smaller scale. In 2014, a number of Arab states recalled their ambassadors to Qatar in protest to Doha’s support for Egypt’s Muslim Brotherhood movement.

This took eight months to resolve before relations were fully restored. So this pot had been brewing for a long time and it seems that a boiling point between these states and Qatar has finally been reached.

A live snapshot of @qatarairways flights in Middle East with the new flight restrictions in place. Iranian airspace getting a lot of use! pic.twitter.com/MEfQ0YRmLQ

The U.S. has major military installations in Qatar. How will this affect the U.S.-Qatari relationship?

It is too soon to say how these diplomatic moves will affect the United States’ relationship with Qatar, if at all. U.S. military relationships in the region have been known for their flexibility and pragmatism.

In terms of basing agreements for U.S. forces and airplanes, Qatar has been an important partner in the region. The al-Udeid Air Base in Qatar is America’s largest air base outside the United States, and is a key launch point for the anti-ISIS air campaign, for example.

In the short term, the ban on commercial travel and shipping to Qatar might adversely impact America’s ability to keep the base supplied with food, etc. Already there are reports of shelves on grocery stores being empty and my contacts in Doha describe a situation of panic and uncertainty on the street.

The U.S. will be able to overcome this challenge at a cost. If the travel restrictions continue into the future, eventually the U.S. will have to weigh up if the benefits of maintaining the base outweigh the cost of doing so.

Is this a positive development from the U.S. perspective?

The second and third order effects of this could be profound. Will Qatar firmly enter Iran’s camp? Will Qatar double down on its support for the Muslim Brotherhood? This all remains to be seen.

That said, the U.S. will probably not officially take sides. Secretary of State Rex Tillerson already said he “hopes two sides can work things out.” The U.S. has an interest in Arab unity in the face of the Iranian threat.

This move comes only two weeks after President Donald Trump’s visit to Saudi Arabia, where he urged Muslim leaders to purge Islamist extremists from their lands. Did that speech play a role in provoking this move?

It is not clear what sort of direct impact Trump’s visit might have had, but it is not surprising that this move came in the wake of Trump’s visit.

It is well known that the U.S. shares many of the same concerns as Saudi Arabia and the United Arab Emirates about Qatar’s support for Muslim Brotherhood movements across the region and its questionable support for some of the more dubious groups in Syria.

Trump sent a message that the U.S. is keen to engage with the Arab world against these common threats after years of hesitancy and neglect from President Barack Obama in the region.

The Saudis and their allies are sure to feel emboldened as a result of their renewed ties with U.S. and saw a window of opportunity to pressure Qatar. Whether or not it could have geo-political consequences in the region for a generation.